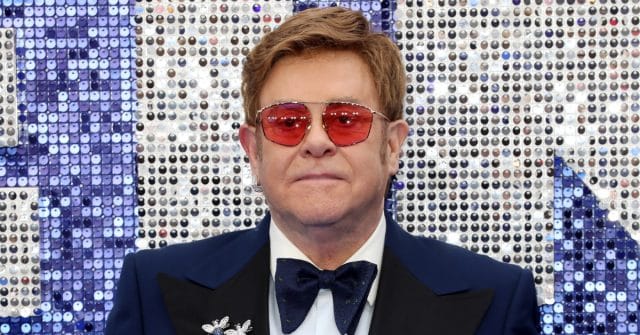 The gay music icon is happy about the sex scene in the surreal biopic between a young Elton and manager John Reid, played by Taron Egerton and Richard Madden respectively.

John told the Mirror: “I’m so glad it’s in there because I am a gay man and I didn’t want to airbrush it under the carpet.

“I’m proud Rocketman is the first major studio film with a gay love sex scene in it. If I’d left it out, I’d have felt I was cheating people.

Sir Elton John and Taron Egerton perform during the Rocketman Gala Party during the 72nd annual Cannes Film Festival on May 16, 2019 in Cannes, France. (Gareth Cattermole/Getty)

“If they don’t like it, I understand, but it’s part of who I am. That night was a very, very important part.”

The reference to sex scenes being swept under the carpet may be a veiled reference to Freddie Mercury biopic Bohemian Rhapsody, which attracted controversy over a reported decision to tone down its graphic gay content.

John added: “If I am telling my story, it has to be honest.

“I was a virgin until then [age 23]. I was desperate to be loved and desperate to have a tactile relationship.

“When they tear their clothes off in the movie, that was how it happened. It was in San Francisco… when he is lying in my arms and I’m sitting back with a smile I’m thinking, ‘Ah, I’m normal, I’ve had sex.’

“When I grew up, my father told me if I masturbated I’d go blind. At 13 years of age, I started to have glasses and I went, ‘Oh my God! This is coming true!’”

Ahead of the film’s release, actor Richard Madden said that on-screen sex scenes between gay men “shouldn’t be a big deal.”

Madden explained: “The more we have these things in films the less of a big deal it’s going to become, and that’s what it should be – it shouldn’t be a big deal.”

“But, particularly for us in this film, that scene is such a pivotal moment for Elton – it’s the first time he makes love with someone, it’s a really important change point in his life.

“It gave us an opportunity to show their intimacy and that delicateness that’s really important to represent the start of that love story.”