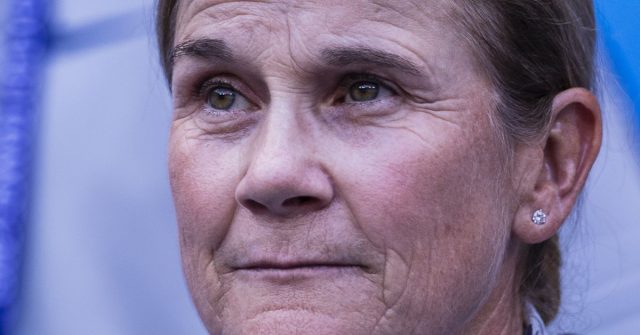 Calling her role as coach of the undefeated world champion U.S. women’s national soccer team “the honor of a lifetime,” Jill Ellis announced on Tuesday she plans to resign.

Among soccer coaches around the globe, Ellis is the only one who coached two women’s world cup winning teams. Ellis coached 127 USWNT games, more than any other coach in history. She leaves after more than five years with an incredible record of 102-7-18.

Ellis, 52, announced in a statement on the U.S. Soccer website that she will step down as head coach following the completion of the team’s Victory Tour in early October.

“The opportunity to coach this team and work with these amazing women has been the honor of a lifetime,” Ellis said.

“I want to thank and praise them for their commitment and passion to not only win championships but also raise the profile of this sport globally while being an inspiration to those who will follow them. I want to sincerely thank the world class coaches and staff with whom I’ve had the privilege to work – they are quintessential professionals and even better people. And finally, I want to thank the Federation for their support and investment in this program, as well as all the former players, coaches, and colleagues that have played an important role in this journey.”

Ellis, 52, said she plans to transition from coach to ambassador for the team, a role that includes representing the U.S. Soccer Federation in speaking engagements and events.

“When I accepted the head coaching position this was the timeframe I envisioned,” said Ellis in her statement. “The timing is right to move on and the program is positioned to remain at the pinnacle of women’s soccer. Change is something I have always embraced in my life and for me and my family this is the right moment.”

Ellis is married to Betsy Stephenson, with whom she has a 14-year-old daughter, Lily; they call Miami home. Being the out coach of the U.S. Women’s World Cup team with the most out players ever is more than a footnote; It’s a significant achievement in a year that marked 50 years since riots at The Stonewall Inn launched what is today’s LGBTQ pride movement.

Ellis, too, has a lot to be proud of.

Beginning in May 2014, Ellis led the USWNT to eight tournament championships: the 2015 Algarve Cup, the 2015 FIFA Women’s World Cup, the 2016 CONCACAF Women’s Olympic Qualifying Championship, the 2016 SheBelieves Cup, the 2018 SheBelieves Cup, the 2018 Tournament of Nations, the 2018 Concacaf Women’s Championship and the 2019 FIFA Women’s World Cup. As head coach, both interim and officially, U.S. Soccer noted Ellis called up 79 players to take part in at least one training camp, and of those 79 players, 56 earned at least one cap. Ellis also gave 28 players their first caps.

Under Ellis’s leadership, the team set a number of records in 2015 as they defeated Japan, 5-2, to win the USA’s first World Cup title in 16 years. While they remained unbeaten in 2016 (22-0-3), and 2018 (18-0-2), it was the 2016 Olympics in Rio that remained a painful memory. That infamous penalty kick led to a loss to Sweden, and the first-ever loss for the U.S. in the quarterfinals in Olympic history. But it also spurred Ellis to reimagine the squad into what many called the best in the history of the sport. The USWNT shut out the Netherlands, 2-0, to win the 2019 World Cup Final in Lyon, France, a back-to-back victory for the history books.

U.S. Soccer said on its site that it will soon name the first General Manager for the U.S. Women’s National Team and then undertake a search for a new USWNT head coach. Ellis’s successor will be the ninth official head coach in program history, following Mike Ryan, Anson Dorrance, Tony DiCicco, April Heinrichs, Greg Ryan, Pia Sundhage and Tom Sermanni.

One thing is certain: Whoever comes next can never replace the one and only Jill Ellis, only succeed her.