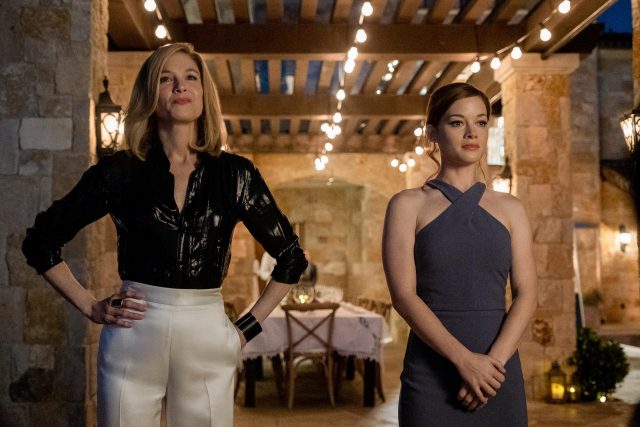 What/If also stars Jane Levy (Castle Rock) and Blake Jenner (Glee) as the happy young couple Lisa and Sean. Lisa has devoted her life to curing a rare disease that killed her sister, and longs to start her own biotech company. Sean works as a paramedic after his major league baseball career came to an abrupt end. When billionaire Anne Montgomery (Zellweger) appears on the scene, offering to give Lisa the money for her startup, Sean & Lisa must confront their trust for one another. See, Anne’s offer has one caveat: she gets to spend the night with Sean, who can never discuss the details with anyone…not even Lisa. Anne, however, has some shocking secrets of her own, known only to her loyal butler, Foster (Louis Herthrum of Murder, She Wrote).

Created by Mike Kelly (Revenge), What/If has trashy, soapy fun to spare as Anne goes about manipulating everyone around her, exploiting the insecurities and secrets of everyone in Lisa and Sean’s life. That includes a frisky gay couple (Juan Castano and John Clarence Stewart) who do some sexual exploring outside their own relationship.

Queerty scored some on-camera time with Zellweger (above), and Levy and Jenner (below) just ahead of the premiere the series. What/If is available to stream on Netflix as of May 24.

Watch the trailer for What/If below: