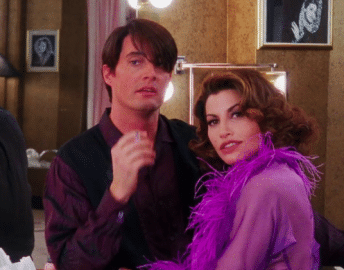 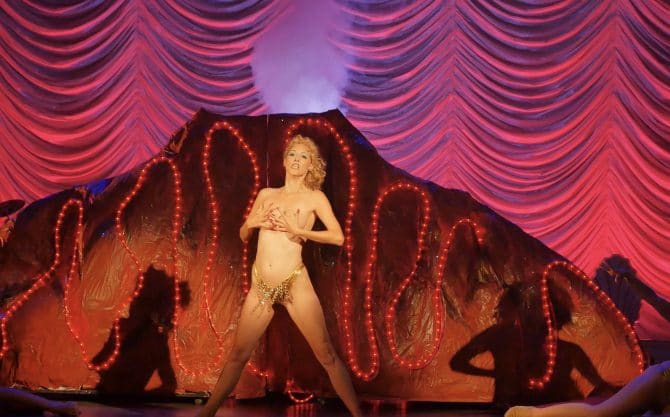 Jeffrey McHale loves Showgirls, and he knows we do too.

So he’s just directed You Don’t Nomi, a documentary on the camp classic which premiered at the Tribeca Film Festival. Showgirls, of course, opened in cinemas back in 1995 to some of the worst reviews in history and an anemic box office. As directed by Paul Verhoeven and written by Joe Esterhas, critics slammed the movie as tasteless, sexist garbage and audiences stayed away.

The reception for the film nearly ended the career of star Elizabeth Berkley. Yet, miraculously, the movie developed a rabid cult following which persists to this day. You Don’t Nomi is one of two forthcoming feature documentaries about the Showgirls phenomenon, and should not be confused with Goddess, the upcoming post-mortem doc from director Jeffrey Schwarz.

McHale’s documentary about a flop movie may, well, not be a flop. A Michigan native, he studied film at Colombia College before breaking into the business as a TV editor, working for stations like WGN-Chicago and Al Jazeera America. You Don’t Nomi marks his directorial feature film debut.

We snagged some time with McHale before the You Don’t Nomi premiere at Tribeca to chat about his Showgirls obsession, and breaking into the world of features.

You take an unusual approach to the material in your film. This isn’t about cast & crew recounting stories about the film or the reaction to it. Your movie reminds me of Room 237, the documentary about The Shining, in that it’s not so much about Showgirls itself as it is how people watch the film. What inspired you to take that approach?

Well, I’ve been a fan of Showgirls since I first saw it, as you probably were. I came to it late in life; I feel like I should have seen it earlier than I did. I saw it in my mid-20 in Chicago when I lived there after it had kind of become a queer cult classic. Upon first viewing, you know, it just draws you in. It’s like oh my gosh, this is for me. And you can tell: it’s for us, but it wasn’t made for us. I’d always been a fan of it, and it just kept popping up in weird and interesting ways throughout my life. I was actually at the Cinespia screening when Elizabeth Berkley introduced it. That was the closest thing I’ve ever had to a spiritual experience.

So after that…I was just curious to see why it spoke to me so much. I just started reading and consuming everything that had been written and produced just out of my own curiosity. I read Adam Nayman’s book, I read Paul Verhoeven’s book. Obviously, I was familiar with David Schmader’s commentary track. I was just fascinated by the opinions and the relationships that all these people had with the film and just the way we talk about it. 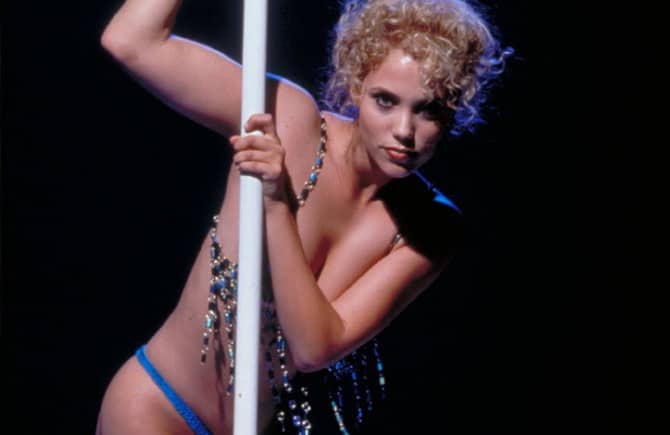 It’s hard not to talk about.

After hearing all this, I just thought this would be a great subject for something personal to work on. So that’s when I just started reaching out to everybody and talking to them. Room 237 and Los Angeles Plays Itself were obviously an inspiration. I had seen those films and seen what is possible and the stories you can tell with media. It’s really inspiring. So for six months I shipped a FedEx kit with an audio recorder around the country, collected the interviews and spent a year and a half editing.

Maybe I just kind of thought I knew what it was going to be based on the publicity and advertisements. Like I say, I don’t know why I hadn’t seen it earlier. I was just kind of blown away by how this thing had gotten by me. It was just a kind of fascination. And it was very similar to what my contributors had experienced. The first six minutes, you’re just like is this real? Those first six minutes are so important because they just tease you up for the ride that you’re on, and it doesn’t let up.

Do you think Showgirls plays differently on the big screen as opposed to at home on DVD?

The Cinespia screening was actually the first time I’d seen it with an audience outside of just viewing it with friends. The cringe moments definitely sting a bit more when you’re with people. You’re picking up on the audience around you. The moments that are hilarious are even funnier. But anything extreme is even more extreme with an audience.

There are a number of camp films in the queer canon. Movies that are so bad they’re good. What sets it apart from other camp films?

Probably a little bit of the production. Just the fact that there was a giant studio behind it, and $40 million poured into this thing by two blockbuster filmmakers, Paul Verhoeven and Joe Esterhas. Just the star power behind it. That’s the biggest thing that sets it apart—just what it had going behind it, and then the response to it plays a lot into the queer embrace of it. As queer people, we empathize with that. It’s fun, but you can also draw parallels to the experiences we have.

There’s some debate over whether the movie is intentionally meant to be campy, at least in moments. Joe Esterhas really holds steadfastly to that. By contrast, Kyle MacLaughlan swears up and down it was supposed to be a hard drama. What’s your assessment? Is it funny in a perverse way? Or is it just perverted?

I don’t think there’s an answer. I think that’s the biggest thing. Obviously, there’s this curiosity when you see it. You want to figure it out and understand how did this thing happen. But that was one of the most interesting things about this project: After reading all of these materials by these brilliant writers, it’s not about finding the answer. It’s about our experience with it, and how it lives.

You have this kind of Felliniesque style in the film. You toy with breaking the fourth wall. You use footage not from the film to comment ironically on the commentary. What was your approach?

I kind of wanted to make another subplot, a kind of circular world where you had Verhoeven’s other film characters interacting with Showgirls, and that interwoven with the commentators commenting on the film. I think when I first read through everything from the contributors and I started going back and watching all of Paul Verhoeven’s other films, I was just kind of amazed at the parallels and the similarities. All these thoughts were kind of connected. People don’t understand how Paul Verhoeven made Showgirls because they think of RoboCop and Total Recall and Starship Troopers—you know, his blockbusters. But if you look at his stuff from the Netherlands, there’s just so much there. It was hard because I was like how can I use these visual elements and incorporate them? It was only after the interviews were done that I came up with the idea to play with these visual elements.

It’s good you mentioned his other work because what Verhoeven does in Showgirls is kind of par for the course for him.

Though in some ways it is extreme, even for him. Do you see the film as homophobic? Misogynistic? Do you think Paul Verhoeven is personally misogynistic or homophobic? These elements keep cropping up in his work.

That’s a tough question to answer. If you look at the work, then yes, the one thing we discuss in [our film] is that people can draw their own experience or interpretations of it. Just point to the huge female fanbase that find power and strength in the movie. Also, a movie doesn’t have to be a feminist film to carry a feminist message. The same is true for homophobia too.

That’s certainly true of Elle, his recent film with Isabelle Huppert. She’s incredible, but there’s a very thin line between a film where a character inhabits a misogynistic world and a film that is actively misogynistic.

Related: Is “Showgirls” The Greatest Bad Movie Of All Time?

One of your interview subjects observes the expressionistic elements of the film, particularly the use of mirrors and doppelganger. You also point out that all of Paul Verhoeven’s work is kinky, campy and gratuitous. It’s a film made with polish. It shows a great technique. Is that a strength of the film, or does it emphasize its total failure?

I think that’s part of the reason why we’re still talking about it—just grappling with those themes. If those themes and elements weren’t there, I don’t think it would be as controversial. I don’t think the response would have been strong. Who knows what kind of life it would have had after [bombing]?

That’s hard to know. One of the questions I asked contributors is “What’s next for camp?” The poet, Jeffery Conway, who wrote Showgirls: The Movie in Sestinas parallels the “Trilogy of Camp:” Valley of the Dolls, Mommie Dearest and Showgirls. I did a little math and found that there are exactly 14 years between those films. So I think it was 2009-2010 when the next one should have happened. I don’t think we’ve had something since Showgirls like it. So the next Showgirls won’t be a dance flick. It won’t be about strippers. It will have to be about something else.

Why do we have this cultural interest in failure? The worst of the worst. Everything from Fail Blog to Tonya Harding.

I don’t know. That’s a good question. I think there’s a need to kick people while they’re down. If you just look at events in the media…scandal sells.

You Don’t Nomi debuted at the Tribeca Film Festival and is currently looking for distribution. It will screen at the Inside Out festival in Toronto May 31, at at San Francisco’s Frameline festival June 27.