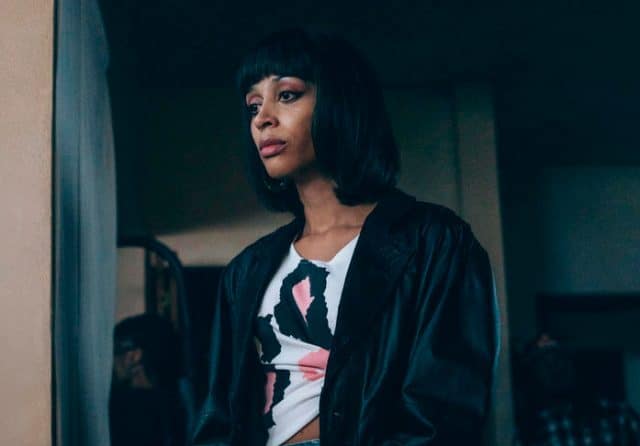 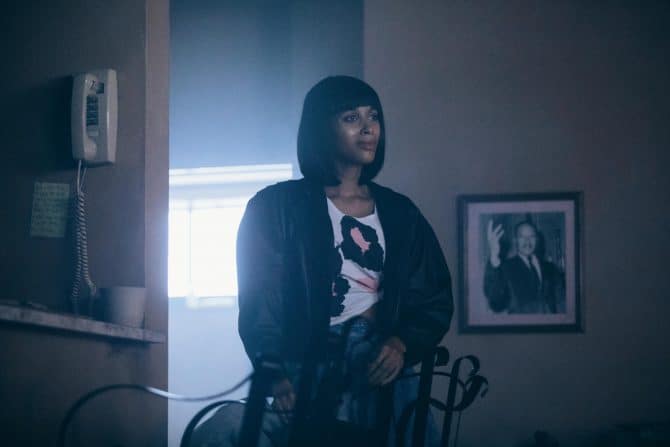 Isis King just snagged a plum role in the Netflix limited series When They See Us, directed Ava DuVernay, the director of Selma and 13th. It lands on the streaming service this weekend.

King knows a good showbiz break when she sees one. Having grown up in Maryland, she eventually moved to New York during her teen years to find a welcoming community after coming out as transgender. She got her first big break by landing a spot on America’s Next Top Model in 2011–the first transgender woman to do so. Though she didn’t win, the visibility helped her launch an acting career, landing spots on shows like Shameless.

Her tenure in New York helped prepare King for her latest role. When They See Us dramatizes the case of the Central Park Five–five African-American teens convicted of the brutal attack and rape of a jogger in New York City in 1989. The series argues that the racial and class bias of an overzealous district attorney pressured police and prosecutors to force confessions from the boys which eventually landed them in prison for as much as 13 years.

Queerty snagged a few minutes with King just ahead of the premiere of When They See Us to chat about her role and her career momentum.

So, I’ve done guest spots on different shows, pretty much acting since Top Model. I’ve been acting for about a decade, but roles are just now starting to open up. [Transgender actors] have more opportunities. This audition came up and it was very, very interesting because a lot of times auditions come up spur of the moment. You gotta be ready. So I got a call saying, “Hey, you have an audition for tomorrow. Here are your lines. Memorize it by tomorrow and do you think you’re up for this challenge? You have to portray a boy and a girl, before and after transition.” The crazy part was I was just talking to my manager about this. Because I come from a model show, I always get typecast as the pretty girl with no real substance or depth. 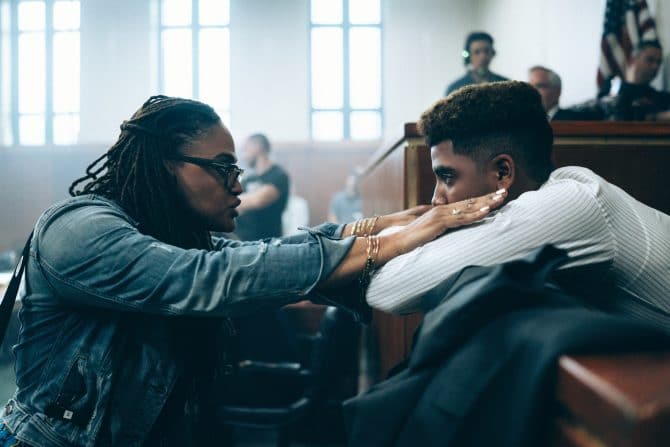 And I can do more than that. I remember for a lot of auditions back in the day, I would get, “You’re too passable. You’re too petite.” And now, like, not too long ago, they said: “You’re too pretty.” And I had to call my manager and say it means I’m too passable. They can’t use the same wording as they used to, because we have voices now. As an actress, I like to do voices. I like to do disguises. So when this came up, I was like, Oh my God, this is what I’ve been looking for. And of course, it’s Ava. So I’m up for the challenge.

I went over to my manager’s house so she could coach me, and so she could film it. She sent it in. So, I got it Wednesday, had to film Thursday. Friday I get a call that they wanted me to fly to New York to do a second audition in front of Ava.

My heart stopped. So for the audition, I went in there and said: “Do you want me to take my wig off?” I had cornrows underneath. I wanted to show her that I’m seriously committed to not just being pretty. As an actress, I want her to see I’m going to take the pre-transition part seriously because I haven’t seen it done seriously yet. In my own personal experience, it’s one thing playing butch. It’s another to say this is pre-transition. So I really wanted her to see I was serious and I wanted to get out of my comfort zone. And she was so sweet! Jharrel Jerome, who plays my brother, was there for chemistry, and we hit it off right away. We made a handshake up on the spot. I felt so comfortable. It was like a dream. I think it was a week later; I was still in New York. I got the call that I got it, and I just started to cry. It’s another step in the right direction to me being taken seriously as an actress.

She was very warm. She reminded me of my aunt or something like that. I was really scared but when I saw how warm she was, I gave her a hug when I met her. She was so warm from the beginning and that carried over to the actual performance. She gives a type of vibe that you want to make her proud. I’ve worked with a lot of directors—all men—some, but not all, had a very intimidating vibe about them. I didn’t really feel a connection. So with her, I really wanted to make her proud of me. The night before I had a really intense scene with Niecy, I had a dream that Ava told me, “I’m so proud of you.” So I was so nervous meeting Niecy. And we had to go over and over the horrible things she had to say to me.

So when we got there, I told Ava “I had this dream…” After we finally finished the scene of me crying and screaming, she looked at me and tapped my back. She said, “I’m so proud of you.”

And I started bawling. She’s so awesome. Her level of accomplishment is so high. So to have her look you in the eye and say that, you know, that’s the kind of affirmation as an actress that goes to your soul. As long as I’ve been going I’ve wanted that. It made my whole year. 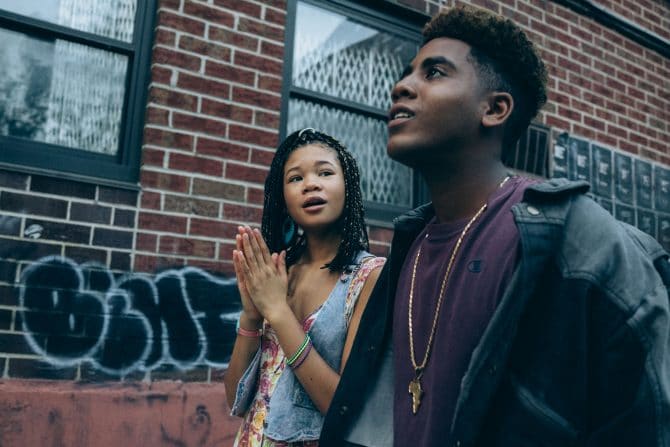 Storm Reid as Lisa and Jharrel Jerome as Korey Wise

So for me as an actress coming from reality TV, it’s really hard to get this kind of opportunity. I’m never prideful. I’m just so thankful.

I knew a little. When I was a kid, I remember I heard a little bit about it. I didn’t know that Trump was involved until I worked on the project. I was like wow, he was causing trouble back then too?!

But I know the story because I’m a black girl from PG County, Maryland. I grew up in an all-black school. I had a cousin that was found innocent but he still had to stay in jail because of certain stipulations. So I have a family that has been in similar situations. I know this story. Even when you don’t know all the details, you know the story because it’s been around me my whole life.

No. I met Korey at the wrap party, which was really, wow. I couldn’t believe I was meeting these men, these strong men who went through so much, especially Korey who was in [prison] a lot longer than the rest of them.

Well, I have two younger brothers; I’m the oldest like Marci was. I always wanted to pull my brothers to the side, especially my youngest brother who just turned 18, and kind of just mentor, tell him things he should watch out for. In that aspect, seeing Korey skipping school I know that because I’ve been there. So many times. It’s like I’m not going to tell but let me just tell you why you should do the right thing. As far as getting kicked out of the house, I didn’t, but I did have problems with family when I came out. I moved to New York to get away from Maryland to make sure that they couldn’t dictate what I was going to do. This is a story we know oh-so-well. We know so many, especially black trans women, who have this story. 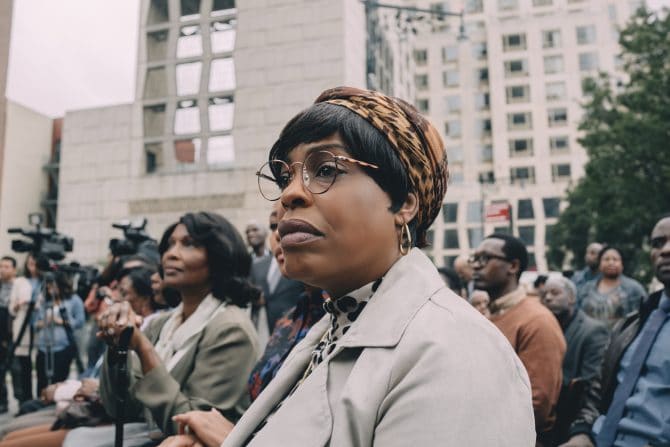 I just wanted to be as honest as possible, and to do Marci justice. She was a real person. I just wanted to be strong for her. You know, my character is kind of a butterfly. She starts as a caterpillar as Norman, then she turns into Marci, then she appears as an angel. So it was kind of different phases. I think in my final scene, another trans, black woman had just been killed. It was so emotional. And Ava gave me the freedom to interpret that however I wanted to. But I had to be strong for [Korey]. I had to be strong to let him know that I was ok. I didn’t want to show him the other side. He had to know Marci was ok. After the take, I started bawling my eyes out.

Yes, and I love both of them. Jharrel in Moonlight…phew.

For that scene itself, we had our own corners, our own space. I had a coach on set to kind of help me keep it. My attention span is so short, if you say, “Hey girl,” I’m like haaaaay!

Ava also knew we didn’t have that much time, so the coach just kind of helped me to stay there in between. It was three cameras, so many angles, so little time, that I couldn’t really interact with them outside the scene. I knew I could lose it, and it was too emotional a moment to just lose and come back. That night lemme tell you, I slept so good. I was so exhausted. That was one of the toughest and rewarding days of my acting career.

I moved to LA three years ago. Like I say, I’ve been pursuing acting for about nine years. I started Off-Broadway and then went to short films, then I shot an indie film in 2011. For me, that was always the focus. So I moved to LA to really put that first. I wanted to be open for auditions, not just for video submissions, but I wanted to be there. So mostly it’s auditioning. I have a theatrical agent, a commercial agent. Compared to the audition slate two years ago, we’re at a way better place. We’re getting there slowly but surely. I’m still waiting for the superhero role or the sitcom. Whether kicking ass, being the flirt, being the schoolgirl, whatever you need. I’m waiting for those. And I just thank Ava for giving me a platform to show me outside of oh she can strut with no depth.

Actually, just recently—I’ll tell you this so you can put it out there—they recently announced a new Mortal Kombat movie. I don’t know if Tanya will be in there, but I’m like hey guys! I posted on all my social media pictures of Tanya and pictures of me saying, “We look just alike. Put me in your movie. And by the way, I played her in all the games. She was way too sassy to just be cis.”

Way too sassy. So book me, please.

When They See Us hits Netflix May 31.