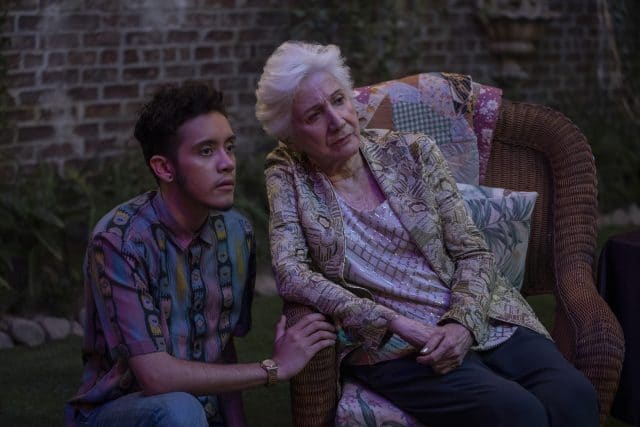 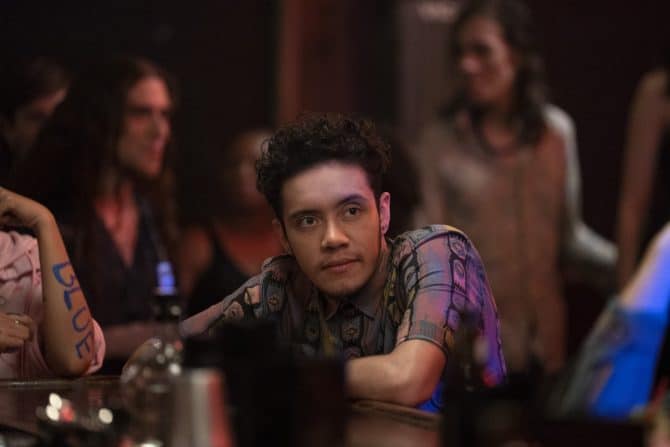 Garcia (who uses a single name, like Madonna) utters the words in characteristic soft-spoken timbre. The trans-non-binary actor is in the final push to promote their screen debut: the Netflix revival of Tales of the City coming June 7.

In the revival, Garcia plays Jake, a transgender man living in the iconic apartment building at 28 Barbary Lane under the watchful eyes of transgender stoner hippie Anna Madrigal (played by Olympia Dukakis, reprising her original role after 25 years). Over the course of the season, Jake struggles with the final steps of his transition, his crumbling relationship to longtime girlfriend Margot (May Hong) and rejection from his family.

Garcia landed the role while studying at New York University, where they just completed another semester.

We chatted with Garcia about their character, the pressures of joining the Tales cast, and the power of using art as a cry for social justice.

Yeah, it is. My agent. That’s all. What I was told was it was an open call, that over 5,000 people auditioned. I was one of them. Lauren Morelli [head writer & show runner] said I was the first person that they saw for it, simply because they had another audition for another show that I had already put on tape. I had done it and a month or so had passed. I thought I didn’t get it, so it was ok. I would keep moving. I was looking into an internship over the summer, and my agent called about a week and a half prior to my moving and said they wanted to see me again. I was living in Chicago at the time, so I flew out to New York to audition again. By the time I flew back, [my agent] said I booked it.

It all happened so fast. Just thinking about it now, it all happened last year around this time, actually. So I mean, I’m really fortunate to have had an agent at the time.

Went I went in for the audition I did, but when I got the audition I had not. But I knew to do my research, and that’s how I found out about this whole history since the 1970s. It was a whole new world of new information, which I loved. I’m really grateful for it.

I only came to New York for school. I just finished the first semester of my second year. I am originally from Chicago, born and raised. At a random train station, I met a man who eventually became my mentor and invited me to an event. I write poetry, and I had to perform a piece at the event. About a year and a half later, he asked me to be in a piece he was writing and directing with a bunch of kids in the city. So that was sort of how I fell into the theatre. I was 17, I believe. 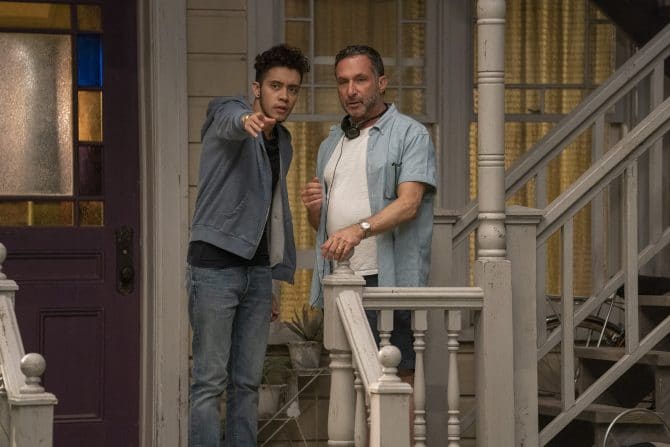 Yeah. So all I really knew prior to coming in was theatre as a radical form of art, as a form of activism and how to conduct social justice through theatre. So yeah, and then it spiraled out into one thing after the next. Moving out here for school was also a surprise. I didn’t think I’d get in. So a year of that, and taking off a semester to do Tales.

Yeah, at Tisch. The studio is called open arts, which focuses a lot more on acting, writing directing, movement, co-writing. Those are all the things we focus on. It’s kind of a collaborative environment.

I’m extremely grateful for everything.

For me personally, my over-all is that I’m queer. I’m just queer, and the rest is up in the air. Once you start getting into specifics, people ask questions and it comes to the point, you know, where you think I don’t owe anyone answers. As long as you’re authentically living as yourself, and you’re happy, you’re comfortable, that’s what’s important. You don’t need anyone else to say, “Yeah, you can do it because you checked off this box.”

Does that make sense? 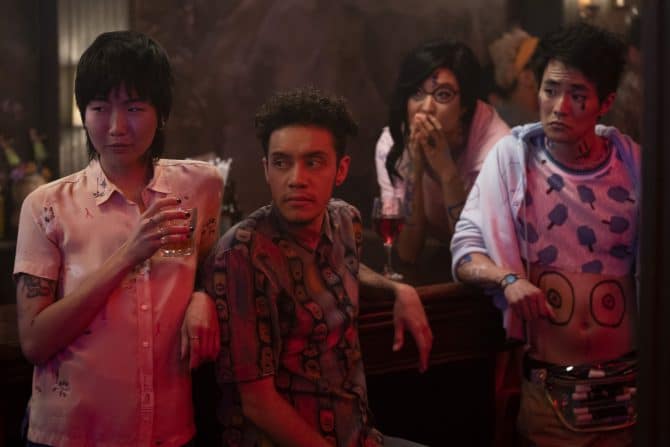 Garcia (2nd from left) with May Hong, Christopher Larkin, and Ashley Park

I don’t know what this means. I don’t know what it means that it’s coming out this Friday. But I’m always nervous. I’m always worried and overthinking, and I did that the entire time I was on set. More often than not, I had to be reminded that I had a right to be there, that I knew what I was doing, that the casting people didn’t make a mistake. Lauren and Laura did a really wonderful thing. They were so kind. They were just constantly giving me reassurance. A lot of my nerves came from the actual role. Not playing Jake, because I felt like I was just playing myself. Sure, Jake has different mannerisms—all those technical things. But on paper, what he was experiencing, I’ve experienced, which is experimenting with men, how he’s being seen by the world, his relationship, longing to love the person that he’s with, and what that looks like.

So yeah, it was a formidable role, and it was hard a lot of time not to think people are going to see this. But that didn’t come until later after everything was done. Lauren and I have this ongoing joke that this isn’t a real show.

So we were at the wrap party, and she asked me, “Do you believe it now?” And I was like, maybe. So I have no idea. I think the nerves just come from myself.

I don’t know. I think they all surprised me in different ways. I, growing up, loved Ellen Page. I loved An American Crime. I loved Juno. And I saw them in that order. I had no idea that they were the same actor. I was like holy sh*t. I was nervous to meet her. You know that quote, “You shouldn’t meet your heroes?” It was the same thing. But Ellen is so kind and so gentle. We hung out. She’s just a normal person. 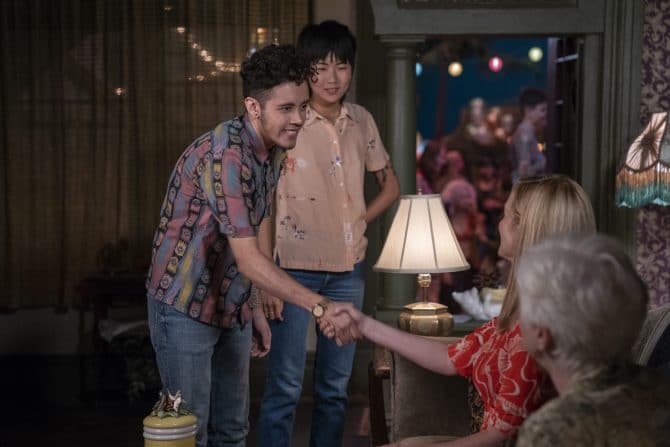 Laura, my God, she would just take her time. If I was struggling in a scene, she would just sit down with me. She sat down with me more than once, and just the time she took with me. And Olympia, just her honesty and her patience. These are all things people don’t have to do. I thought that when it was all over and we were done filming, that was that. People would go on being famous, and who was I? But that wasn’t the case at all. And everyone was so kind and attentive. And we carried on these relationships, which surprised me.

I didn’t know until episode three! I was like wait a minute, is Olympia..? Because obviously, you don’t know in the audition. Even after the first read, I was blanking. So I asked Lauren. What we were told was that she was grandmothered in, and that makes sense to me. It makes sense to be me because, through the entire process, I didn’t cringe once in anything I ever read about. All the effort that was put in, all the trans people in front of the camera, behind the camera, in the writer’s room, the executive producers—anyone—nobody has bad intentions. And sometimes it’s not about intent, it’s about the effect. I understand that. And maybe some people will be upset. But I would hate for that to be what the focus becomes, and for everything else to be ignored. That’d be missing out on this great thing. And you see flashbacks, where Jen Richards [who is transgender] plays [young Anna]. And it’s not like they took a man and dressed him up like a woman, and that’s something happens constantly throughout history which is ten times more awful.

And the older gays love her. I know people who knew about the series long before I was alive. They wanted [Olympia] to come back. I think that also touches on, within the queer community, the separation between generations. We’re not always going to see eye-to-eye. Maybe that will be one of them. But I was not at all offended. There was nothing there that made me cringe or feel uncomfortable because of all the care that was put into it.

I’m terrified that because this is my first role, and because of the character I play, I’m scared that then I will be forever pigeonholed.

Yeah, that I can only play trans men. So that’s a fear of mine: that I will never be able to play cisgender roles. But, I don’t know if I have any ambitions. I want to finish school. Art and public policy are a big interest of mine. But as an actor, I enjoy theatre. I like on camera. I don’t think I prefer one over the other. I’ve found love in doing both.

Whatever I end up doing, I only want to do it so long as it has some kind of positive impact, and brings about change. I want to contribute to the world in which we’re living.

Tales of the City comes to Netflix June 7.