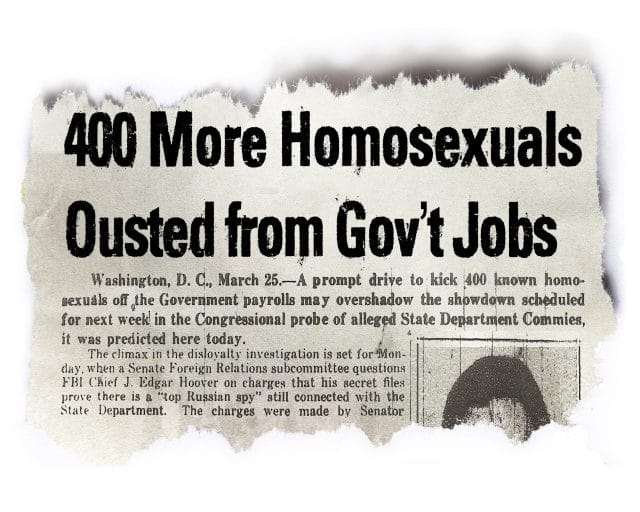 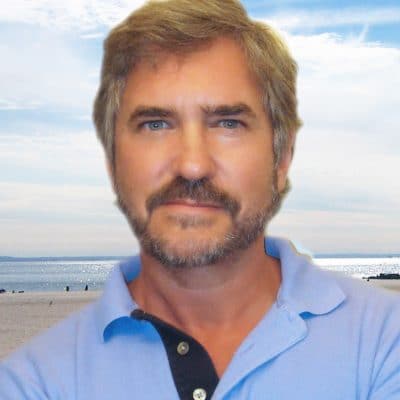 You know the Red Scare, but do you know of The Lavender Scare?

The first time director discovered the little-discussed chapter in American history in the book of the same title by David K. Johnson.

The result is a new documentary, opening June 7, that delves into the not-entirely secret history of American homophobia, and how a few opportunistic politicians (several of whom were closeted) promoted themselves by encouraging the outing and career ruin of LGBTQ people in the government.

President Eisenhower would eventually sign an executive order banning gays and lesbians from government service in 1953 under the assumption that they were susceptible to blackmail by the Soviet Union (the same authoritarian government Trump now gladly allies with against the interests of the US). The ban would remain in effect for almost 50 years, even after the fall of the Iron Curtain.

Now Josh Howard and David Johnson, who appears in the film, has created a cinematic retelling of the nation’s first battle over gay rights and how, in many ways, it still rages on. With narration by Glenn Close, Cynthia Nixon, Zachary Quinto and TR Knight, The Lavender Scare calls out the officials that helped create the modern stigma against gay men and women.

The film opens in New York and Los Angeles June 7, before airing on PBS and online streaming June 18.

Queerty managed to chat with Howard just ahead of the cinematic opening.

I came across David Johnson’s book. It had been out for several years, and I happened to come across it. I was reading it just wondering how is it possible I don’t know any of this stuff? I started talking with other people, even gay historians. This chapter of American history has really remained hidden all these years. I met with David, and we talked about the possibility of doing the documentary, and that’s how we got started.

On and off. He gave us access to all his files and interviews. The process of writing a book is quite different from making a film, but he was absolutely instrumental. The film would not exist without David Johnson’s book. We’ve been having a great time at festivals and screenings doing Q&As together. So he’s certainly involved.

That’s such a great point. People will say to me: “Exactly how many people got fired?” But that’s not exactly the right question. The point is the US government was putting its official stamp of approval on homophobia. This not only affected government employees, but it also affected private companies that did business with the government. Beyond that, it really did cement in people’s minds this image of homosexuals as disloyal and dangerous and immoral. As you say, it set the tone for the decades that followed.

Exactly. It’s also true there was never a single case of a gay man or lesbian who was blackmailed into giving up government secrets. It’s not clear, exactly, if the people behind this policy actually believed it either. It was a potent political tool at a time before “family values” became a catchphrase. We suffered for decades as a result.

This was pushed as a political issue in his 1952 presidential campaign. His literature and his TV commercials really pushed this point about morality. They were trying to get churchgoing people to the polls. The message was clear. Whether he believed it, I don’t know. Does President Trump actually believe that there are caravans of murderers and gang members and rapists, or is it a convenient way to rally the base? 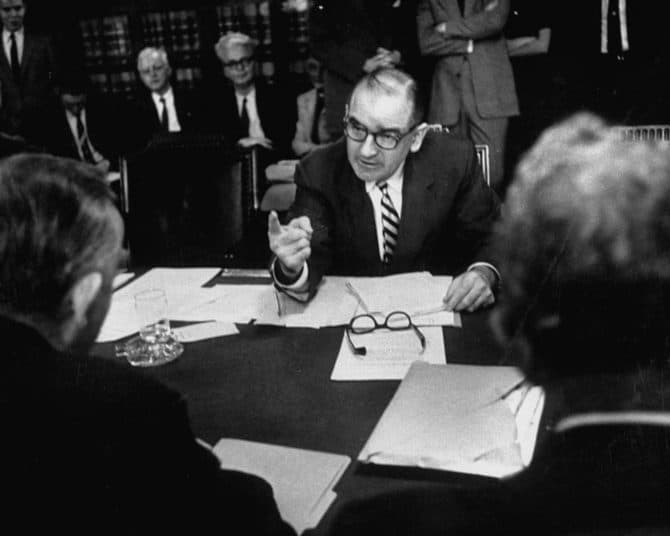 Well, it’s based on what’s politically expedient. It’s interesting that the caravans were right there before the midterm election [in his mind], and then the day after election day, they were gone from it.

Then they came back, you know, when they were needed.

McCarthy, when his campaign against communists was dying out, he came up with the gay angle. That actually started causing attention to be paid to his bachelorhood, and he quickly and abruptly married his secretary to end those rumors. In terms of Roy Cohn, and McCarthy and of course J. Edgar Hoover [original director of the FBI, who was gay], it’s something we wrestled with. It really didn’t fit the narrative of the film. It wasn’t just the FBI that was going after gay people. It wasn’t just McCarthy. It is certainly mentioned in David’s book, but in terms of the narrative of the film, it just didn’t fit.

No one we approached turned us down. We started shooting about 10 years after David did all his research. A lot of the people who David located had passed away by that time. But his experience was that a number of the people he contacted were reluctant to speak to him. There are people quoted in the book just referred to by their initials because they didn’t want to be identified. But that wasn’t our experience. We were particularly surprised that the government officials we contacted were so eager to speak with us and defend their actions.

I find that so interesting. As heartbreaking as the victims’ stories are, in a way, I find hearing the perspective of the government officials even more fascinating in a way. 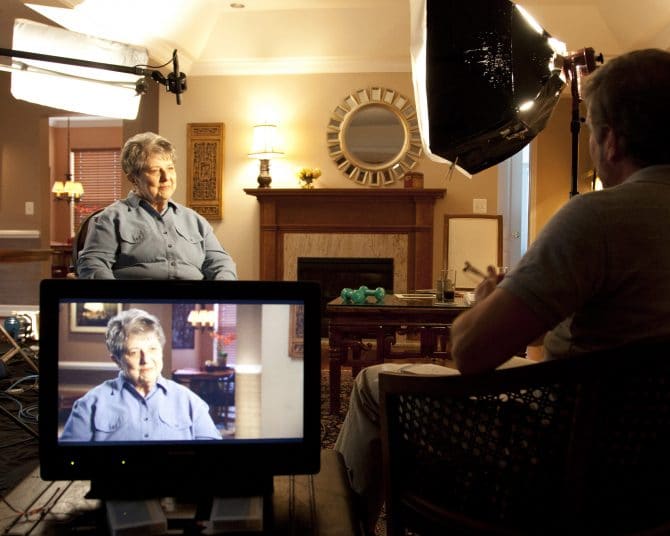 The most we would get from people would be, “We wouldn’t do the same thing today.” But they also said it was the right thing to do at the time.

You know, to your point about people coming forward, I’ve been absolutely amazed at the number of people who’ve come up to me at screenings and said, “I was fired by the government for being gay.” It amazes me there are still that many people. I’m still always surprised.

It was 1995 that President Clinton officially reversed the Eisenhower executive order. People were still being denied security clearance. Being gay was a reason to deny clearance. 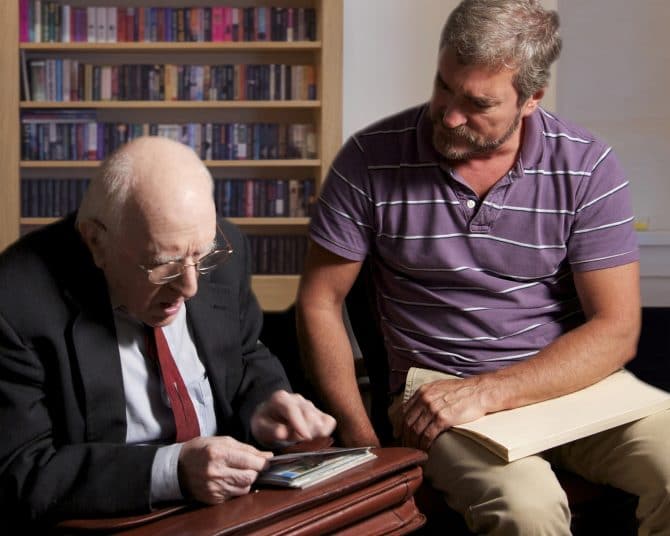 You know, Frank Kemeny [one of the subjects of the film] was one of the few trained astronomers at the beginning of the space race. The Russians had just launched Sputnik. Everybody was panicking that the Russians would take over space, and here was this Harvard Ph.D. in astronomy, but it was more important that he be fired than contribute to the government.

I think it’s important to know what our history is, and I think it’s particularly important to know that the homophobia of the 50s was a direct backlash to an earlier time when being gay was more accepted by society. I think it’s attributed to Mark Twain, but history may not repeat itself, but it often rhymes. I think it’s important, particularly for younger people, to know that equality didn’t always exist. There’s also no guarantee that the march forward continues in a straight line. Certainly, the Trump administration should be setting off alarm bells with people that we do need to know our history as a way to know where we’re going.

None come to mind. Most of the people I spoke to have been out of government so long they wouldn’t know. There is a great documentary Outrage on this very subject, which looks at closeted politicians who make careers out of voting against the interests of LGBTQ people. To think that Aaron Schock was in the closet at all is pretty amusing.

The Lavender Scare opens in theatres in New York and Los Angeles June 7. The film then plays on PBS and subsequently streams on PBS.com June 18.