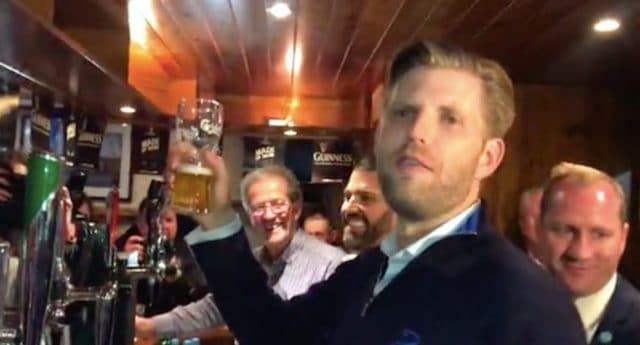 President Trump’s sons visited at least three pubs Wednesday night in the village of Doonbeg, the location of Trump’s international hotel and golf resort, the night before commemorating the 75th anniversary of D-Day.

The Times reports that the Trumps offered free rounds during the bar carousing but failed to pay before leaving, according to one pub owner.

Caroline Kennedy, the owner of Igoe bar and restaurant, had nothing but praise for Eric and Donald Jr. when interviewed by the Irish Mirror on Thursday. “They were so lovely and down to earth and gave a great hello to everyone. I said, ‘Come on lads you have to come in and pull a drink’ so they did.”

“They were so nice, they came into the restaurant and the local priest Fr Haugh presented them with a picture of the two castles of Doonbeg,” Kennedy said. “They thanked everyone for their support and for coming out to meet them and said there was a drink for everyone in the house and it was their small gesture.”

But when it came time to pay for the bill, the brothers told the bar they weren’t carrying any cash.

Kennedy said she isn’t worried though, having been assured that the hefty bar bill would be paid for.

“I don’t think we’ve to worry about getting paid for that,” she said. “I don’t think they carry cash. We were told it’d be all sorted later so there’s no problem. We have the world press in our village and we are being zoomed in around the world and you couldn’t buy that publicity.”

When asked by a BBC reporter if the pub crawl was a good use of U.S. taxpayers’ money, Eric Trump reportedly said, “We’re just trying to have a good time.”

“Don and I want to buy everyone cocktails tonight,” he told the Belfast Telegraph.

So I got to ask @EricTrump a question as the Trumps did a pub crawl thru Doonbeg – is his trip a good use of US taxpayer money? ‘We’re just trying to have a good time’ the answer, poses for selfies, refuses to answer further & ducks into Madigans pub surrounded by fans &security