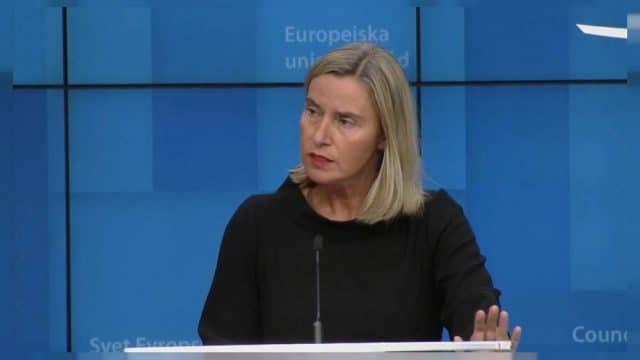 European Union nations threw their weight behind the Iran nuclear deal on Monday, saying Tehran’s recent provocations did not yet amount to a “significant” breach of its terms.

The 2015 agreement is “not in the best of health, but it’s still alive,” outgoing EU foreign policy chief Federica Mogherini told reporters.

She said efforts to “hold the pieces together” were better than letting the deal fail because “not having it in place is a terrible option for everybody.”

“The response of European Union to Iranian violations, reminds me of the European appeasement of the 1930s,” he said. “It seems there are those in Europe who will not wake up until Iranian nuclear missiles land on European soil. But then it will be too late, of course.”

France, Britain, and Germany on Sunday called for a resumption of dialogue, saying the agreement was at risk of falling apart over escalating tensions in the Persian Gulf.

Signed almost exactly four years ago, the agreement aimed to extend the amount of time it would theoretically take Iran to produce enough fissile material for an atomic bomb.

But after the US pulled out last May and reimposed sanctions on Iran, Tehran said it would no longer respect some of its obligations.

Defying a warning by the European parties to the pact to continue its full compliance, Tehran has amassed more low-enriched uranium than permitted and it has started to enrich uranium above the 3.67% permitted by the agreement.

Tensions were further stocked last week when Britain seized an Iranian tanker off the coast of Gibraltar on suspicion of violating sanctions against Syria.

Iran has demanded Britain release the ship and denies it was taking oil to Syria in violation of European Union sanctions.

Mogherini said the recent steps taken by Iran were a regrettable, but reversible.

“I can’t say if we are at the 11th hour, I hope not because there are rational reasons for [the deal] to remain,” she said.

In a televised speech on Sunday, Iranian President Hassan Rouhani said Iran is ready to hold talks with the United States if Washington lifts sanctions and returns to the deal.

U.S. President Donald Trump’s administration says it is open to negotiations with Iran on a more far-reaching agreement on nuclear and security issues.

But Iran has made any talks conditional on first being able to export as much oil as it did before the US withdrew from the pact.