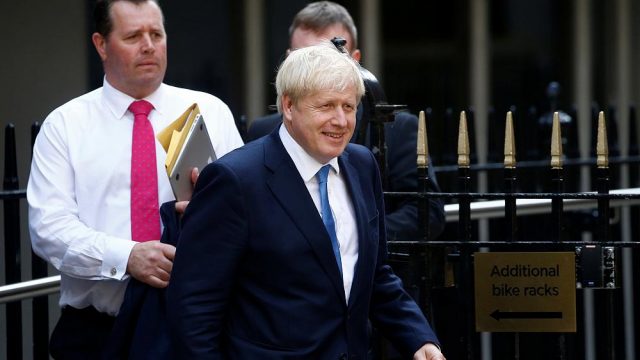 European leaders congratulated Boris Johnson after he won the race to lead the UK’s Conservative party and become the UK’s next prime minister, but many acknowledged the challenges that lie ahead.

Johnson has said that the UK should be willing to consider a no-deal Brexit.

After current leader Theresa May announced her departure in May, he commented: “We will leave the EU on October 31, deal or no deal. The way to get a good deal is to prepare for a no-deal.”

Watch Euronews’ Jack Parrock examine the European Union reaction in the above video player above.

Here’s what European leaders have said about Johnson’ victory:

Ursula von der Leyen, the former German defence minister who will take over as European Commission president on November 1, reacted to Johnson’s win during a press conference with French President Emmanuel Macron.

“There are many different and difficult issues to tackle together. We have challenging times ahead of us,” she said.

“I think it is very important to build up a strong and a good working relation (sic) because we have the duty to deliver something which is good for people in Europe and in the United Kingdom, so I’m looking forward to working with him.”

Jean-Claude Juncker, the current Commission president, congratulated Johnson on his appointment as prime minister one day early (Johnson does not officially become Prime Minister until he meets with the Queen). The Commission chief said in a letter posted on Twitter that he looked “forward to working together in the best possible way.”

The EU’s chief Brexit negotiator, Michel Barnier, said that the EU looked forward to “working constructively” with the prime minister “when he takes office, to facilitate the ratification of the Withdrawal Agreement and achieve an orderly #Brexit.”

“We are ready also to rework the agreed Declaration on a new partnership in line with #EUCO guidelines.”

Charles Michel, the prime minister of Belgium, who will take over as the next EU Council President tweeted: “Important challenges ahead, such as #Brexit”

Lithuanian EU health commissioner Vytenis Andriukaitis, however, compared Johnson to former Russian president Boris Yeltsin in a blog posted on the Commission’s website: “There was something in the way of doing politics that was similar: many unrealistic promises, ignoring economic rationales and rational decisions,” he wrote.

Italy’s prime minister, Giuseppe Conte, said that he planned to work with Johnson “in a constructive way to guarantee an orderly Brexit and ensure the prosperity of all European citizens.”

A spokeswoman for German Chancellor Angela Merkel posted on Twitter that the leader extended congratulations to Johnson and said she looked forward to “good co-operation.”

“Our countries should continue to be close friends in the future,” she added.

French President Emmanuel Macron said he would call Johnson as soon as he officially becomes the UK’s prime minister.

Macron said he looked forward to working with Johnson soon not only on “European topics that we share and the continuing Brexit negotiations” but also on international ones such as “the situation in Iran and topics of international security”.

Macron also thanked May during the press conference, stating that she had taken over in a “difficult context after the referendum” and that she worked with “courage and dignity” and never “blocked the functioning of the European Union”.

Nathalie Loiseau, who headed Macron’s party list for the EU elections, wrote on Twitter, however, that Europe would stand by the current deal.

Ireland’s deputy prime minister, as well as the foreign affairs minister, tweeted that the country would “work constructively” with Johson to “maintain and strengthen British/Irish relations through the challenges of #Brexit”.

The Irish “backstop” — a position of last resort to maintain a seamless border between Northern Ireland and the Republic of Ireland in the event that the UK leaves the EU without securing an all-encompassing deal — is a key issue in the Brexit negotiations.

Russian senator and former Russian representative in the Council of Europe, Konstantin Kosachev, said the election of Boris Johnson was the same type of oddity that “falls within the scope” of UK politics and said that “storms and quakes are awaiting Britain” in the near future.

We will update this story as more leaders react.