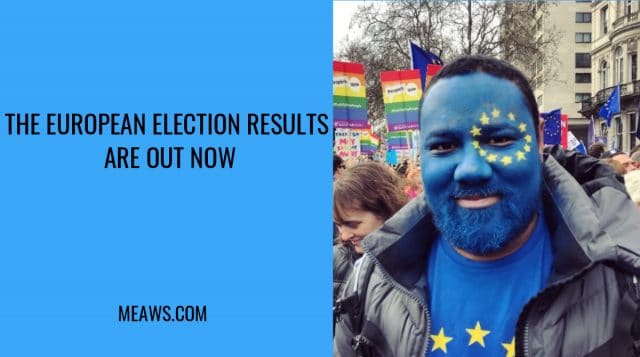 The European election results are out now, after four days (23-26 May) of voting across 28 countries.

Voters across the European Union (a political and economic union of 28 member states) went to the polls to elect more than 700 members of the European Parliament (MEP).

The main job of the EU Parliament is to pass laws and enforce rules.

In order to get this done, most MEPs join bigger political groups, such as the two most prominent parties — the center-right European People’s Party  (EPP), who held 217 seats in the previous Parliament) and Socialists and Democrats party (S&D), who previously held 186 seats. Other minor parties include the Greens, European Conservatives and Reformists and Eurosceptic groups.

Anti-European Union Nigel Farage and his Brexit Party won big in the European election results in the UK.

With 64 out of 73 MEPs declared, Farage’s party had won 28 seats. The party leader himself won a seat.

The two major parties, Labour and the Conservatives, meanwhile, took a beating.

As of 2am, Labour had won just 10 seats and the Tories just three.

Across Europe, pro-European Union parties held on to two-thirds of the vote,

Citing projections from the European Parliament,  Reuters reported four pro-EU middle ground parties lost under 20 seats–securing 505 out of the total 751.

Far-right and nationalist parties made considerable, but not massive, gains.

Labour’s shadow foreign secretary Emily Thornberry said the party had lost out because it was ‘not clear’ on Brexit.

‘Labour should campaign to remain in EU’ she told the BBC. She also said there should be a second referendum.

The United Kingdom narrowly voted to leave the European Union in the June 2016 nationwide referendum.

Then on 29 March 2017, the UK invoked Article 50 (a procedure for a member state to withdraw voluntarily from the EU) to leave within the next two years. This date is significant because if the UK left the European Union before 22 May 2019, they would not have to go through with the European Parliament elections.

But since then, politicians have not been able to come to a consensus about how to leave, or even whether to leave at all.

A January YouGov survey found 56% of voters would choose to stay in the EU, compared to 44% who wanted to leave.

Each time Prime Minister Theresa May — — went to the European Parliament to negotiate trade deals, she would come back and the UK Parliament would reject it.

As a result, the UK did not negotiate a deal in time so it legally had to go through with the European Parliament election over the weekend (22 May).

Public opinion on whether or not to leave the European Union is still extremely divisive.

As a result, there was a major swing to Nigel Farage’s far-right Brexit Party, as well as parties like the Liberal Democrats and Greens — who both ran campaigns with the promise of a second referendum on whether or not to leave.

The two major parties — Conservatives and Labour — both want to leave the European Union.

A recent survey found 71% of LGBTI people would vote to remain if there was a second referendum (also known as a People’s Vote) on Brexit.

For comparison, only 52% of heterosexual voters would vote Remain. 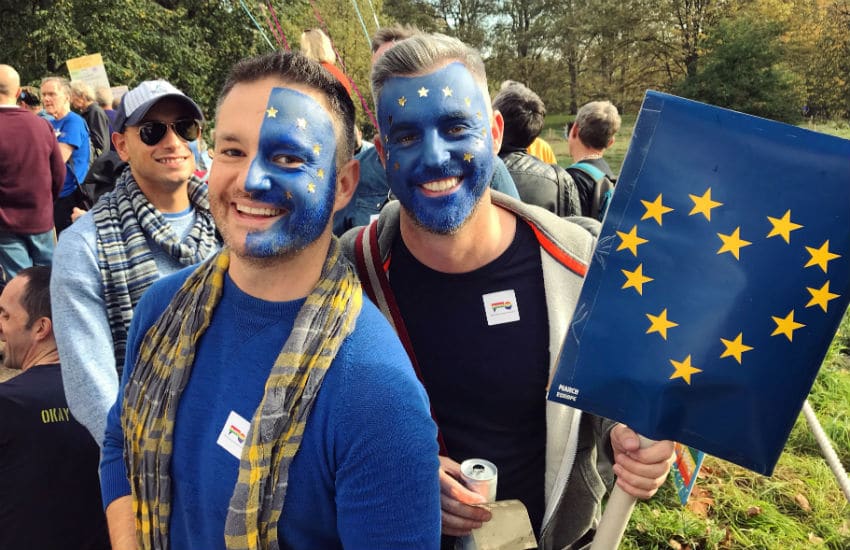 Gay Star News supports a People’s Vote on Brexit because it will severely impact on the LGBTI rights the EU helped create for the UK.

Some of these rights include free movement, trans rights, employment rights, relationship rights, asylum and rights guaranteed by the ER Charter.

The Charter is the only legally binding international human rights document that expressly protects LGBTI people.

According to a recent report: ‘Brexit will reduce the UK’s global influence and have an impact on LGBTI rights further afield.’

The report then said: ‘The UK is a generally positive force in promoting LGBTI equality in the EU.

‘The EU also provides effective mechanisms to promote equality worldwide. Therefore Brexit, and the loss of those mechanisms and connections, harms not only LGBT rights in the UK, but also those of others around the world,’ it said.