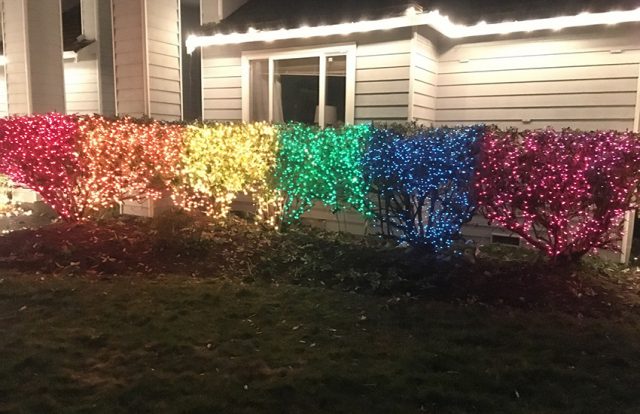 This is the best way to be passive-aggressive.

An ex-Mormon is fighting back against her homophobic neighbor in the perfect way possible – with very gay Christmas lights.

Posting on Reddit, Mrs Rosey Crotch (great username) wrote how she had become the subject of discussion at the local church.

‘She had learned that we were Mormon from church,’ she wrote. ‘We are no longer Mormon, this issue is why I left. She came bouncing over and when my husband told her we no longer attend, she didn’t really get the message. She also must have missed the HRC sticker on my car.

‘Anyway, thinking that we were allies, she went on to tell us how horrified she was when her son got turned down for prom because the girl was already planning on going with her girlfriend.

‘And THEN the junior high had an assembly about transgender people where they spotlighted one of the students who is a transgender boy. I thought she had meant that the school outed him, which, in my book is horrifyingly wrong.

‘Nope, he had organized the assembly and spoke of the realities of being transgender. That, coupled with the school’s justifications for letting lesbians attend the prom together and doing an assembly that taught kids the facts about being transgender were just too much for her.

‘She said that she had to move them away because she was so sick of the gays and transgenders and everyone making their “lifestyle” okay.’

So knowing screaming at her wouldn’t change her opinion, this ex-Mormon went a more passive-aggressive route.

‘I know that I’m not going to change her opinion, no matter what I say. Having moved her kids to escape teh gayz, I’m sure me telling her my opinion on it won’t make a difference,’ she said.

‘Especially if I’m angry. I wanted to yell so much though.’