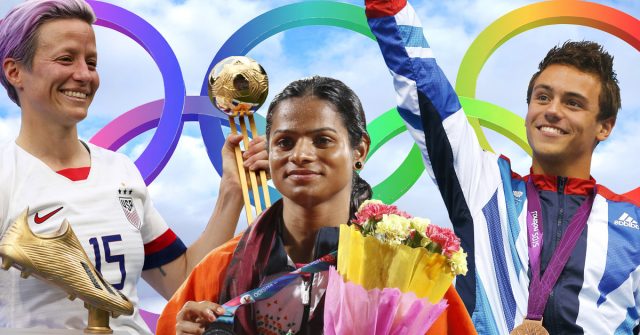 Exactly one year out from the opening ceremony of the 2020 Summer Olympic Games in Tokyo, the field of athletes is already starting to take shape. We know that out world champion Tom Daley will be representing Great Britain. It will be the fourth Olympics for Daley, who came out as gay several years ago.

We also know that the women’s soccer teams of Brazil, New Zealand, Netherlands and Sweden have all officially qualified. All of them had out women on their roster at the Women’s World Cup earlier this summer.

Exactly how many publicly out LGBTQ athletes will be competing next summer in Tokyo at the 2020 Summer Olympics?

It will be the highest number of out elite athletes ever assembled at one event. By far.

The number of out Olympians is growing fast

The number of publicly out athletes competing in the 2016 Summer Olympics in Brazil was 56. Other athletes from those Olympics have come out since, but that’s what we knew at the time.

Similarly, the number of publicly out LGBTQ athletes at the Winter Olympics more than doubled from 2014 to 2018.

Out women will lead the way

Women’s basketball, field hockey, rugby and other team sports should add to the list.

While the number of out women in elite-level sports continues to rise quickly, the number of men lags. In the United States there are exactly the same number of publicly out men in the Big Four sports as there were during the 2012 Summer Games: zero.

We could see our first out trans Olympian in Tokyo

Since regulations stemming from the Stockholm Consensus on Sex Reassignment in Sports in 2003, there has not been an out transgender athlete who has participated in the Olympic Games. Tokyo could be the breakthrough Olympiad.

New Zealand weightlifter Laurel Hubbard has the best chance. The Kiwi heavyweight became the first transgender athlete to medal at a world championship in an Olympic sport with two silver medals at the 2017 International Weightlifting Federation World Championships. As an odd-on favorite to win gold at the 2018 Commonwealth Games, she injured an elbow during a lift and was forced to withdraw.

In 2019, she’s in winning form so far with two gold medals and a silver at the recent Pacific Games competition in Samoa.

If she can stay healthy at age 41, she should qualify for a place on New Zealand’s team for Tokyo. She could also be sleeper pick for a medal there. September’s IWF World Championships in Thailand will be a strong preview of her chances for the Summer Olympics.

A longshot to keep an eye on? Brazilian volleyballer Tiffany Abreu. Since returning to her homeland and becoming the first trans woman to play professionally there, she’s played a key part in in the emergence of her club team, Sesi Vôlei Bauru, from also-ran to Brazil Superliga contender. In the 2017-2018 season she led the Superliga in points per set, and led the team to first ever Paulista, São Paulo’s state championship. This past season, she averaged 18 kills per game as an outside hitter as Sesi Vôlei Bauru reached the Superliga playoff semifinals for the first time in team history.

What hurts Abreu’s chances is breaking into an already talent-rich, experienced and accomplished national team. Brazil’s earned five medal-round appearances in the last six Olympiads, including gold medals in Beijing (2008), and London (2012). The team was left reeling in a upset loss to China on their home floor in Rio in 2016 and finished fifth.

Abreu wasn’t chosen for the team’s most recent selection, which set the roster for a set of key international competitions including an Olympic qualifying tournament in Brazil in August that could clinch their trip to Tokyo. However, Abreu can still impress enough in the Superliga season ahead to get a chance at a roster spot for Team Brazil.

The location of the Olympics won’t hurt

Over the last dozen years a couple of Olympic locations may have hurt the number of out athletes. Both China (2008) and Russia (2014) had bans on expressing one’s sexual orientation outside of what the host countries considered “the norm” (i.e., straight) when they hosted the Games.

While Japanese law doesn’t recognize same-sex relationships, there have been huge strides in the culture of Japan in recent years. Just this week an openly gay politician was elected to parliament’s upper house on a platform calling for marriage equality. Same-sex sexual activity has been legal in Japan for more than a hundred years, and trans people do have a path to legally change their gender. Tokyo, which will host the Games, has anti-discrimination laws that include sexual orientation.

While not as accepting as places like London, Vancouver and Paris, LGBTQ athletes will feel much more comfortable coming out and being out in Tokyo than they would have in Beijing or Sochi.

How many out athletes will we see at the 2020 Summer Olympics?

We do have one specific indicator that can give us a more clear look.

In 2016 there were 11 out women playing soccer in the Summer Olympics. If those same countries qualify for 2020 (and some already have), and they have the same rosters as they had for this year’s World Cup, that number next summer would be 25, an increase of 127%. And that’s not including other athletes who may come out between now and then.