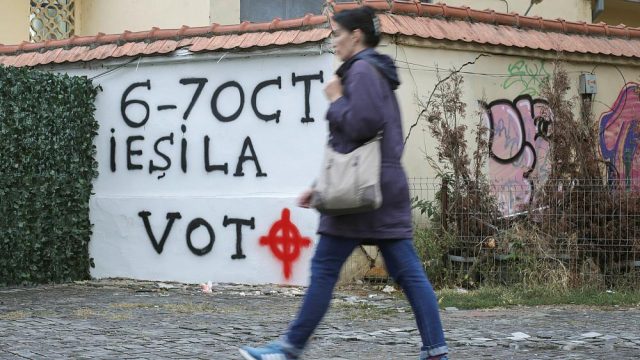 Romania is holding a controversial referendum this weekend that could make it harder than ever for gay marriage to be legalised.

Same-sex marriage or civil unions are already illegal and this poll is a bid to make it harder to unpick this legislation.

It comes after the approval of same-sex marriage in a host of EU countries since the turn of this century.

Campaigners behind the referendum — which will take place on October 6 and 7 — want to stop this wave washing into Romania.

What will voters be asked?

Romanians will be asked whether they want to change the constitution to recognise marriage as being between a man and woman.

The gender-neutral definition at present has it as being “a union of spouses”.

Coalition for the Family, a group of NGOs that helped trigger the vote, fear the current wording opens the door to gay marriage being legalised in the future.

What does the LGBT community say?

“Romania has a responsibility to protect all its citizens – straight and LGBTI,” said Arpi Avetisyan, litigation officer at ILGA-Europe.

“The definition of ‘family’ put forward by the supporters of this referendum is frankly inaccurate; it only captures a very limited fraction of what family means to people in 2018.

“And it is also very out-of-step with reality and with the diversity of families being recognised by international human rights bodies and European courts.”

“Human rights should not be the subject of a popular vote,” he said.

The referendum needs five million votes — or 30% of the electorate — to be valid.

Viski also claimed the announcement of the vote two weeks ago had triggered an increase in hate speech towards LGBT people.

“It brings hate speech from the fringes to the mainstream with an impact on all groups in society, and the rights of all minorities will be put under question,” Viski added.

“Banners have been posted throughout the country calling for people to vote in order to protect kids from the gays.”

What do campaigners for changing the constitution argue?

“The referendum is not of any party, of any political leader, it is all of those who are going to vote for the defence of their children, for their life to be exempt from the ideological lie of the sexual revolution, the lie of those who want to re-educate all of us, parents and children,” said Coalition for the Family, which collected three million signatures to help make the referendum happen.

“We now need to understand how much we need our vote, our presence, how much our children and grandchildren need our protection and our mobilisation to defend their rights and the future.

“Defining marriage as a union between a man and a woman in the Romanian Constitution will make our world, our society, our life able to preserve the truth of our Christian civilization.”

The referendum initiative is backed by the Orthodox Church and other religions and won support from all but one political party in parliament.

Coalition for the Family also supports cancelling subsidies for contraception and elective abortion, forcing parents of minors to have counselling if they want to divorce, and lowering some taxes for married couples.

What is Romania’s attitude towards LGBT people?

It ranks 25th out of 28 EU states based on legislation, hate speech and discrimination against LGBT people, an annual study by ILGA-Europe showed.

But a viral Facebook post by gay bar owner and novelist Alex Andronic last week could serve as a better indicator.

He wrote: “Take the rights I’m already not benefiting from if it calms you down, brings you closer to God, tradition and family welfare. Do exactly as you feel. Because I know what it’s like to be unable to do as you feel.”

His comments drew support but also an outpouring of hateful, graphic and sometimes threatening comments.