Home Gay Life Explainer: Send him back? What it would take for Congress to impeach...

(Reuters) – A dark cloud of impeachment has threatened President Donald Trump for many months, with Democrats in the U.S. House of Representatives, where any such effort to remove him from office would begin, divided about whether to proceed.

In American politics, few procedures are as arduous or as divisive as the Constitution’s carefully balanced law for ousting a chief executive found to be unfit to serve.

No president has ever been removed as a direct result of it. One, President Richard Nixon, resigned before he could be removed. Two, presidents Andrew Johnson and Bill Clinton, were impeached by the House, but not convicted by the Senate.

Since he took office in January 2017, Trump has been under investigation. A turning point came in mid-April with the release of a redacted version of a long-awaited report from former U.S. Special Counsel Robert Mueller.

On Wednesday, Mueller will testify before two House committees about his report, with Democrats planning to focus the proceedings on Trump’s conduct. The strategy, described by Democratic congressional aides, is intended to build support among Americans for Democrats’ investigative agenda, possibly leading to impeachment proceedings.

The 448-page Mueller report explored an effort by Moscow to interfere in the 2016 U.S. presidential election to help Trump win. It described contacts between Trump campaign officials and Russians, but found insufficient evidence to establish that the Trump campaign and the Kremlin engaged in a criminal conspiracy.

The Mueller report also described numerous attempts by Trump and his advisers to impede Mueller’s investigation, but offered no conclusion on whether obstruction of justice was committed.

Trump has attacked Mueller, called his probe a “witch hunt” and scorned talk of impeachment as “dirty, filthy, disgusting.”

Some lawmakers in the Democratic-controlled House favor starting the impeachment process, but their leaders have resisted these demands. Last week, an impeachment resolution came to a vote on the House floor and was killed.

The Senate is controlled by Trump’s fellow Republicans, meaning that any impeachment proceedings that might begin in the House would likely die in the Republican-controlled Senate, unless public sentiment were to shift dramatically in favor of removing the president.

About 45 percent of Americans said Trump should be impeached in a Reuters/Ipsos poll in May, up from 40 percent in April.

Here is how the impeachment process works.

The founders of the United States created the office of the presidency and feared that its powers could be abused. So they included impeachment as a central part of the Constitution.

The president, under the Constitution, can be removed from office for “treason, bribery, or other high crimes and misdemeanors.” What exactly that means is unclear. Historically, it can encompass corruption and other abuses, including trying to obstruct judicial proceedings.

HOW DOES IT WORK?

Impeachment begins in the House, which debates and votes on whether to bring charges against the president via approval of an impeachment resolution, or “articles of impeachment,” by a simple majority of the House’s 435 members.

If the House approves such a resolution, a trial is then held in the Senate. House members act as the prosecutors; the senators as jurors; the chief justice presides. A two-thirds majority vote is required in the 100-member Senate to convict and remove a president. This has never happened.

CAN THE SUPREME COURT OVERTURN?

No. Trump has said on Twitter that he would ask the Supreme Court to intervene if Democrats tried to impeach him. But the founders explicitly rejected making a Senate conviction appealable to the federal judiciary.

The House has 235 Democrats, 197 Republicans, one independent and two vacant seats. As a result, the Democrats could impeach Trump with no Republican support.

In 1998, when Republicans had a House majority, the chamber voted largely along party lines to impeach Clinton, a Democrat. 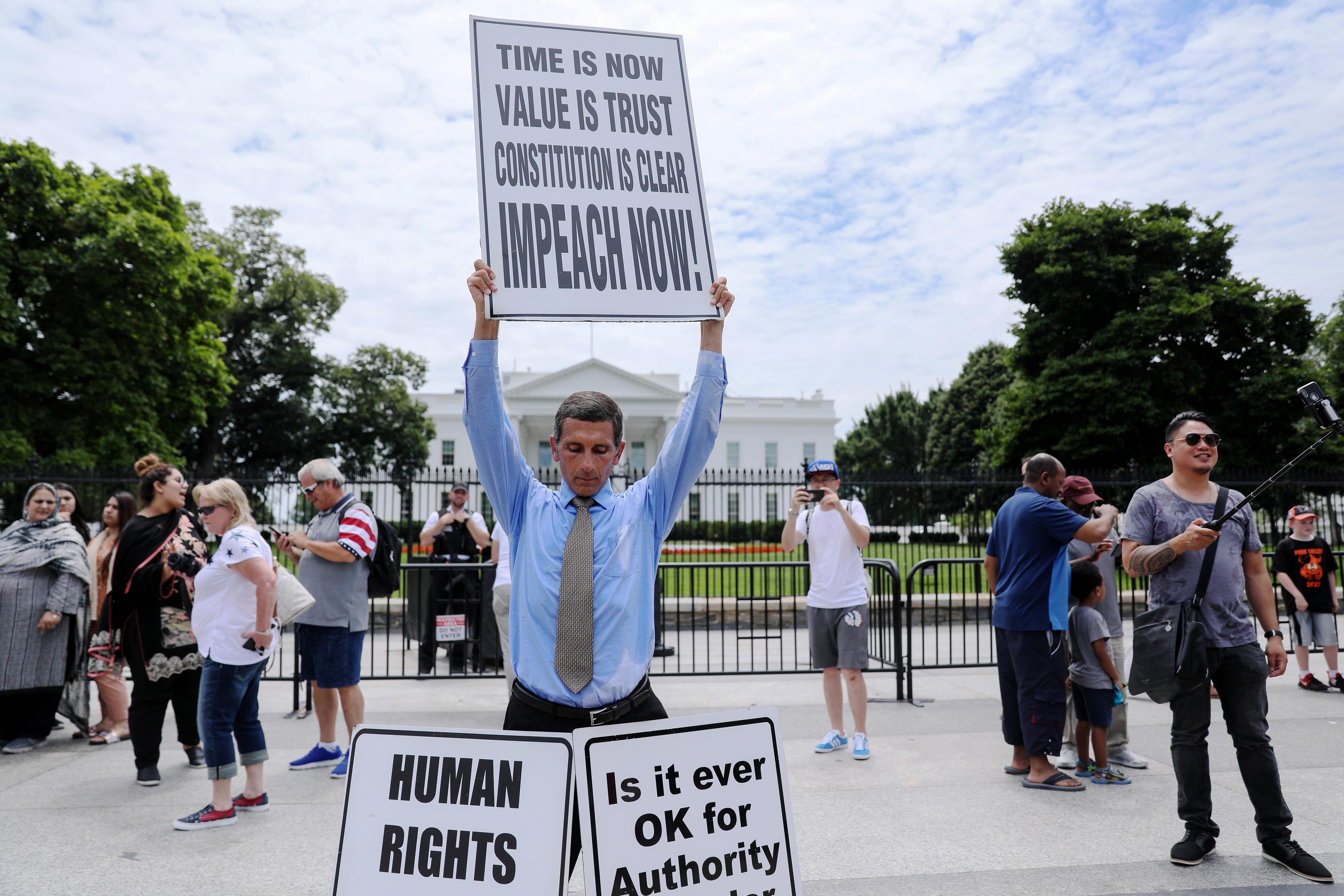 WHO BECOMES PRESIDENT IF TRUMP IS REMOVED?

In the unlikely event the Senate convicted Trump, Vice President Mike Pence would become president for the remainder of Trump’s term, which ends on Jan. 20, 2021.