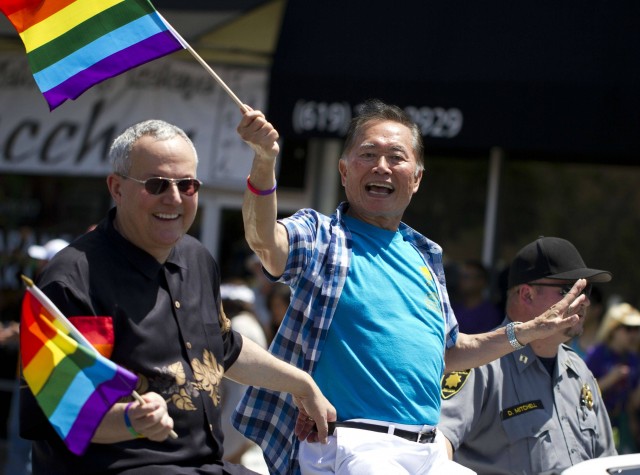 On February 19th of 1942, two months and twelve days after the bombing of Pearl Harbor, 112,000 Japanese Americans were relocated to internment camps all across the U.S.A.  Among them was a five year old George Takei and his family.  They remained in the camp for three years until they were released at the end of World War II.  20 years later, Takei skyrocketed to fame after being cast as Lieutenant Sulu in Star Trek.  But what many people are unaware of is his grievous background and how it molded him into the dedicated activist he is today.

After coming out as gay on October 28th of 2005, Takei began to assemble quite a following, nearly surpassing 9,000,000 followers on Facebook.  He utilizes his social media page to share sentiments, photos, and posts having to do with the LGBT community and the struggles and conflicts they face.  In 2012 he was awarded the LGBT Humanist Award by the American Humanist Association.  Then in 2014 he was given the GLAAD Vito Russo Award, an accolade given to personalities on social media who are making a difference for the LGBT community.  Along with tirelessly defending the community, he has also won multiple awards for his contributions toward U.S.-Japanese relations.

Takei has lived his life honorably by these words.  Instead of being released from those internment camps harnessing a hatred toward the U.S., he decided to make it a better place.  He saw that we, as a nation, were broken and could not be repaired through enmity.  He substituted hate for love, and has been making the world a brighter and more tolerant place ever since.