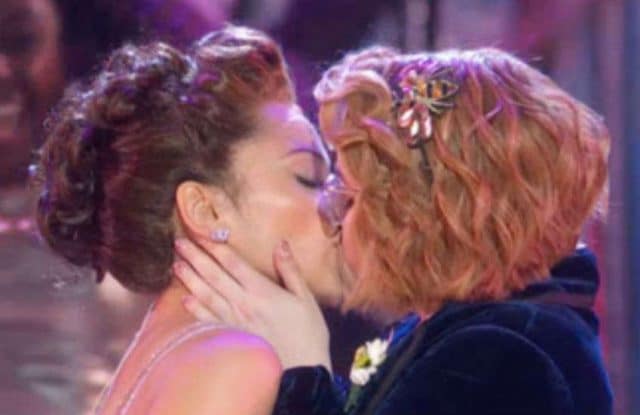 Fans are celebrating after last night’s performance of The Prom at the Tony Awards ended with a lesbian kiss.

While The Prom didn’t win any awards after receiving seven nominations, they still can smile big after seeing the reaction to their performance.

The cast performed two songs from the show, Tonight Belongs To You and It’s Time To Dance.

It tells the story of a gay girl who is banned from taking her girlfriend to the prom in small town Indiana. But when the news breaks, several queer people from around America flock to Indiana to support the girls’ cause.

It’s still a notable moment to put on national television.

When the cast performed the same numbers at the Macy’s Thanksgiving Day Parade, it drew some criticism from viewers.

‘People are just going to keep seeing it,’ Kinnunen told Vulture on the red carpet before the show, ‘because it is what it is.’

‘When you love someone, you kiss them — it’s not a big deal,’ Kinnunen also told Los Angeles Times.

”Yes, there’s always backlash from the people who think it’s wrong and unacceptable, but there’s also always 10 times the amount of people who say, ‘Thank you, we feel seen and represented; this should be the norm.’ It’s been amazing the amount of love and support we get.”

Ryan Murphy also announced plans for a Prom movie for Netflix, so we’ll likely be seeing more of it soon.