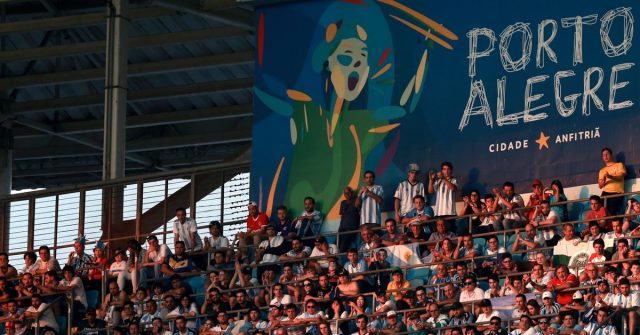 FIFA, the world organization that governs international soccer matches, has fined the Brazilian Football Confederation $15,000 for anti-gay slurs chanted by fans during Brazil’s matches in the recent Copa America tournament.

According to the Associated Press, the chants began during Brazil’s opening match against Bolivian in Morumbi stadium on June 14. The chants reportedly continued during Brazil’s quarterfinal against Paraguay at the Arena do Gremio in Porto Alegre.

While the fine might sound sizable, it’s not really much money for massively profitable sports franchises. As we wrote when FIFA fined Mexico $10,000 for its fans’ anti-gay chants in 2018:

The fine was a minute $10k, a number so absurdly inconsequential to Mexico Soccer that the amount underlines and bolds FIFA’s message to the rest of the world that soccer’s governing body has absolutely no interest in, or commitment to, stopping fans from offending LGBTQ people around the world with an anti-gay chant in stadiums.

This is nothing new. FIFA has fined Mexico over and over and over again for these chants and it hasn’t stopped them. Fans screamed the anti-gay chant at the World Cup four years ago and all that’s happened is more fines.

In 2017, FIFA cited 51 instances of anti-gay chants during international soccer matches and fined 16 countries — most of them South American countries — but it hasn’t really abated the chants.

The chants also occur in the United States, of course. Fans uttered them during the May 2018 opening of the LAFC stadium and even during the L.A. Galaxy’s Pride Night that same month.

We have long advocated that to be truly effective, FIFA or local authorities should stop matched and kick out fans in order to show that true seriousness about stopping fans’ anti-gay chants.

Last year, we “rewarded” soccer fans who chant gay slurs with our ignoble “Outsports Assholes of the Year award.”