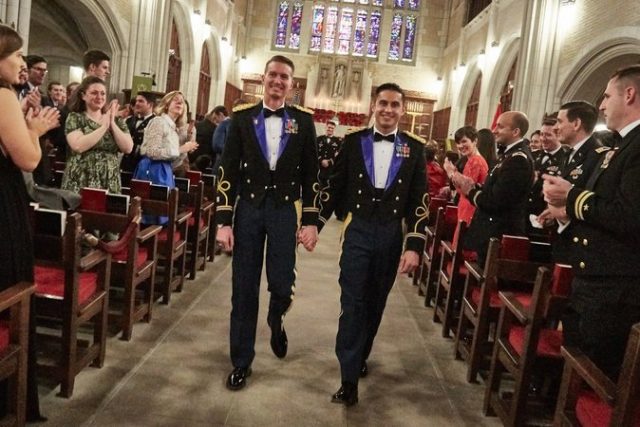 Is there anything hotter than two Army men getting married?

The couple met in 2009 at a time when the military essentially barred the LGBT community from being out due to former President Bill Clinton’s “don’t ask, don’t tell” policy.

According to Capt. Hall,

It’s really frustrating when two people have feelings for each other but are not allowed to act on them. We were serving under a policy that was telling all of us — perfectly capable soldiers, sailors, airmen and marines — to lie about ourselves.

It wasn’t until September of 2011 when Congress repealed “don’t ask, don’t tell” that Hall and Franchino were able to come out and go on their first date, which happened in 2012. But even though the policy had been repealed, it still didn’t make things easy.

“That’s where some guy called us both faggots,” Franchino told The Times.

The couple were on and off over the years but eventually the two decided that they could not live with out each other and were engaged.

Soon enough, the Captains were walking down the aisle of West Point’s chapel in their blue mess uniforms, reciting their vows, and having their first kiss as an officially married couple.

And their families were equally as happy. “You can see the chemistry between them,” Franchino’s father stated. “Without a doubt, Vinny is absolutely a happier person today than he was before he met Dan.”