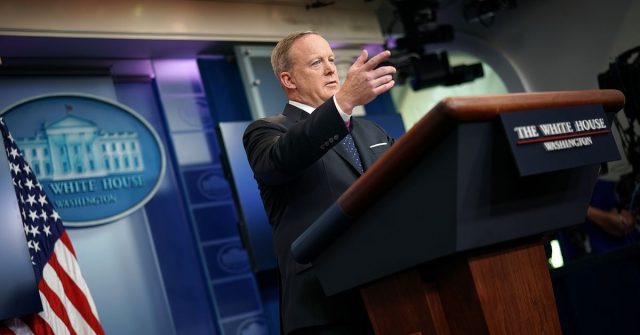 Reports by the Associated Press and the Boston Globe noted Spicer is a Rhode Island native who joined a disabled veteran, Carlos Lopes, in throwing out the ceremonial pitch.

Longreads sports columnist Britni de la Cretaz tweeted to her 13.5K followers: “What an insult to all their queer fans.” That’s in reference to the Trump administration’s record in relation to the LGBTQ community, as reported by the Washington Blade, Buzzfeed and The New York Times.

The PawSox are having Sean Spicer throw out the first pitch on Pride Night. What an insult to all their queer fans. https://t.co/Xei6XsX96g https://t.co/imUCk3R1Pj

Others called it “tone-deaf,” “a garbage move,” and asked why someone from the LGBTQ community wasn’t chosen for the honor. Another criticized the Paw Sox for choosing to have a veteran join Spicer.

They paired it with a veterans thing so to make it harder to criticize, too, it’s gross

Before the game, Spicer presented Lopes, a Rhode Islander wounded during his service with the U.S. Marines in Iraq in 2005, with an all-terrain wheelchair from The Independence Fund. Spicer is member of the board of directors of the charity, which has donated more than 2,300 of these types of wheelchairs.

“Understanding the impact these chairs have in restoring the freedom and independence of our wounded warriors has tremendous impact on me.” – @seanspicer, @IndyFund Board Member.

Thanks @PawSox for helping Veteran Carlos Lopes at tonight’s game.

Spicer made no mention of Pride Night in his own social media post.

Amazing night at McCoy Stadium. Presented this tracked wheel chair to a Marine Corps veteran from Rhode Island on behalf of the @IndyFund at the @pawsox game and then joined him to throw out the first pitch.… https://t.co/3HoiXN88z2

The Paw Sox are the Triple A affiliate of the Boston Red Sox and currently in last place in the International League North. On Friday they played the Charlotte Knights, a minor league affiliate of the Chicago White Sox, and won, 4-3.

Outsports reached out to the Paw Sox for comment but have not received a response as of press time.