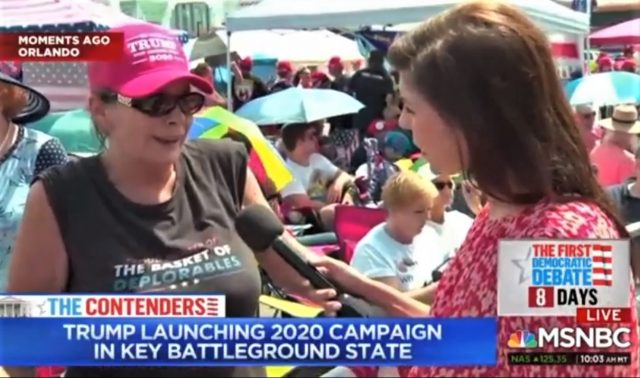 “He’s just for our freedom,” said a female supporter of the president’s when asked why she is supporting Trump’s bid for a second term. “We don’t want socialistic policies. We want to be free.”

“Any disappointments or frustrations” with President Trump, Alba asked the woman.

“No, none at all. None at all,” she said. “I hope we have the next four with him and then after that, I hope his son runs.”

Another female supporter told Alba that she’s supporting Trump in 2020 because he has “done an excellent job. Excellent.”

“You guys need to back off,” she scolded the media. “Leave him alone. It’s true.”

“What’s the main reason you’ll vote for him again,” Alba asked the woman.

“The main reason? Because he’s one of the best presidents that we’ve had for a very long time. Very long time,” she said.

“He doesn’t lie, I know you all say he does. He doesn’t,” she insisted, despite The Washington Post’s tally of Trump’s more than 10,700 false or misleading statements.

“Any concerns about the Democratic opponents and what kind of a matchup he might face?” Alba asked.

The woman laughed before responding: “They don’t have a leg to stand on.”