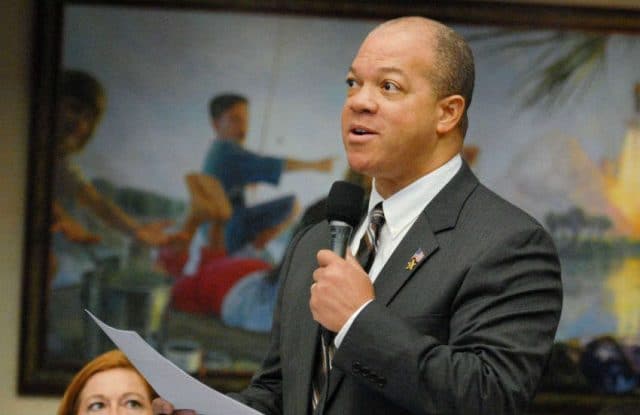 Republican Representative Mike Hill has issued an apology after a recording emerged of him laughing along with a suggestion he introduce legislation that homosexuality be punished with death.

The exchange in question happened at Pensacola City Hall last month. Audio of the incident emerged late last week. Hill was taking questions from the audience.

One participant brought up the subject of the Bible. They suggested that in 1 Corinthians, the Bible says a man who has sex with another man should be put to death (a very subjective interpretation of the ).

Another participant then suggested Hill should introduce legislation that makes homosexuality punishable with death.

Hill chuckled at the suggestion.

When audio of the exchange emerged at the weekend, Hill took a belligerent stance.

He tweeted: ‘Your social media lynching is despicable. I never laughed at a joke about killing gays, and you know it. Your trash media has a history of attacking me.’

He told WCTV the exchange was the result of: ‘A statement that just came out of the audience, I tried to brush it aside.

‘There was no way at all that I condoned or even said the words that gays should be executed,’ said Hill. ‘That’s just absurd.’

However, the exchange was condemned by both Democratic lawmakers and fellow Republicans. This included House Speaker Jose Oliva (R), who called on him to apologize.

On Monday, Equality Florida launched a calling for Hill to resign, stating: ‘That in 2019 any sitting member of the Florida Legislature would make light of violence against the LGBTQ community and advocate for discrimination against LGBTQ Floridians is simply outrageous.’

‘These comments are unacceptable and Rep. Mike Hill (@MikeHillFl) has no business being an elected official.’

Yesterday, Hill issued an apology. He said that he was a Bible-believing Christian and disagreed of the interpretation of that the Corinthians .

‘One man I had never met said the Bible in 1 Corinthians calls for a man having an affair with another man to be put to death. If the man was referring to 1 Corinthians 6:9-10, that text says nothing about anyone being put to death.

‘It simply states people who practice various sins will not inherit the kingdom of God.

‘I deeply regret how the tone of my response to a constituent was received at this event. I believe that no matter one’s race, sexual orientation, religious affiliation, economic status or otherwise, that all lives are created equal in the image of God. I served in the U.S. Air Force to protect the many freedoms we have in the United States for all Americans.’

Hill also took to Twitter to further defend himself.

‘I never laughed at gays being executed … I chuckled at the absurdity of me submitting legislation of such that a person suggested in the audience.’

GSN has reached out to Equality Florida for further comment.