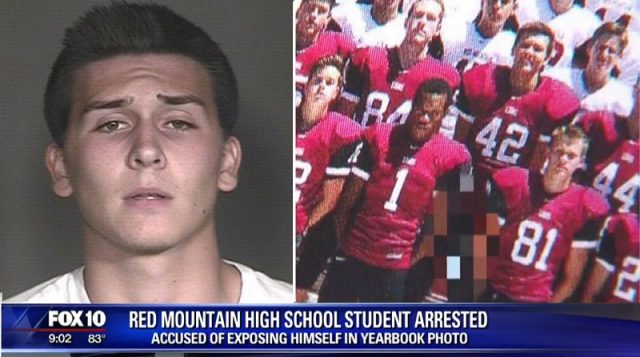 Hunter Osborn, 19, says a fellow football player dared him to expose himself during a yearbook photo which has been circulating for months in football game programs and the yearbook before the school realized what happened.

The Arizona Red Mountain High School Senior now sits at home wearing an electronic monitoring device after admitting to exposing himself in his Varsity team football photo. Police have charged him with 69 counts of indecent exposure and one count of furnishing harmful items to minors, which is a felony.

Apparently, more than three thousand students received a copy of the yearbook with the NSFW photo.

“When people told me about it I thought it was a big thing, but when I looked at it like you can’t really tell, it’s kinda hard to see,” student Zach Anthony told KSAZ-TV.

“At first, it was kind of like a joke, but then once we found out the consequences he has to face for this, we all feel really bad for him, and we don’t think it’s very fair,” said Brooke Bodrero.

Osborn told Mesa police that he was “disgusted by what he had done.”

School officials have recalled the yearbook so that they can “make a minor but critical edit for the inappropriate content.”

His preliminary hearing is set for May 20.

“The district is dismayed by the actions of the students involved in the photograph.

Their behavior does not reflect the values of Red Mountain High School or Mesa Public Schools.

Upon learning of the photograph, school administration immediately contacted police and is cooperating fully with the investigation.

The school and district are conducting an investigation to determine what actions might have prevented the publication of the photograph, so appropriate safeguards can be put in place going forward.

While the small size of the photograph as published makes the details difficult to discern, the yearbook has been recalled so the school can make a minor but critical edit for the inappropriate content.”