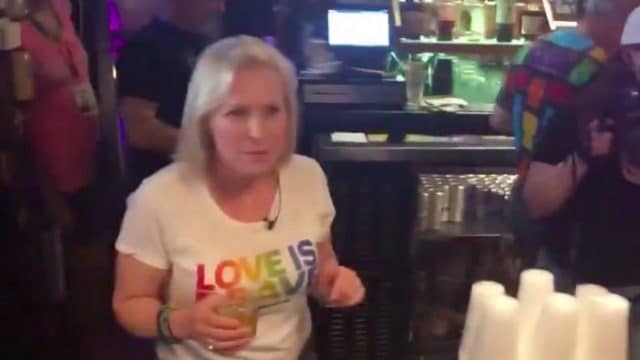 A month after partying with drag queens at the Des Moines, Iowa gay bar Blazing Saddles, Senator Kirsten Gillibrand returned to the bar to serve drinks as part of the city’s Pride weekend celebration. She also went shopping for Pride gear with Pete Buttigieg’s husband, Chasten.

The Hill reports that Gillibrand answered questions while slinging cocktails at the bar on Friday. When one person asked for her favorite drink, she just handed him hers. He later remarked that it was straight whiskey.

She also joined Chasten earlier in the day to buy some rainbow-colored clothing at the Des Moines-based store Raygun. Here are some pics from her Friday in Des Moines.