Former Republican Congressman Aaron Schock, was allegedly spotted at Coachella making out with a guy and partying with other gay men. The closeted Schock has been outed with photos and several eyewitness accounts.

Not one to mince words, West Hollywood Council Member John Duran posted the following on his Facebook page where he calls out the former congressman on his anti-LGBT past.

“About former GOP Congressman Aaron Schock who now lives in LA and was spotted at Coachella hanging out and making out with gay men…… You are now claiming that you are ‘feeling attacked by your own community.’

There were Republicans who voted with Democrats on each of those pieces of legislation. You were not one of them.

You were in a safe GOP district. You would have been re elected every 2 years regardless. You could have moved thousands of people in our direction to help protect us from hate, violence and discrimination. We were being brutally attacked and left to bleed in the streets. Careers were being ruined in the military. We were suffering under the oppression of ignorance.

And you were one of 435 members of Congress entrusted with the power to do something. And you didn’t. In fact, you worked against us.

So you’re beautiful with abs now at Equinox Weho. You are trying to find a place in the Weho LGBT community. And now you are surprised at the reaction you are getting.

How about for starters – you come forth and apologize for your actions. Apologize for your inability to muster the courage and take on members of your own party over their bigotry. Admit that you were the youngest member of Congress and filled with fear and didn’t know how to come out. Or how to take on the religious right. Or how to vote your conscience.

APOLOGIZE. And ask for forgiveness. And ask for a place within the community. And pledge that you will now work with the rest of us to pass the Employment Equality Act. The work is not over. You could lobby your former GOP Colleagues and do good for not only the community, but yourself.

Of course to do that requires COURAGE. The risk of being rejected and disparaged. It requires FORTITUDE. Being able to stare down your former colleagues who are on the wrong side of history. It requires SWEAT, BLOOD, TEARS. That is the price that each of us have paid for entry into the club.

It’s not too late. Turn around and face the past with integrity and truth.” 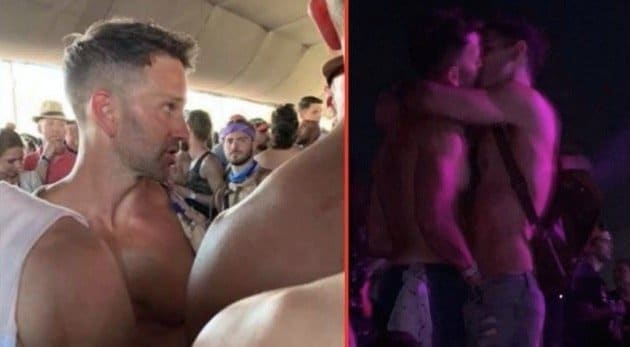 Congressman Aaron Schock has been spotted in WeHo being chummy with other gay men prior to his gay tryst at Coachella.