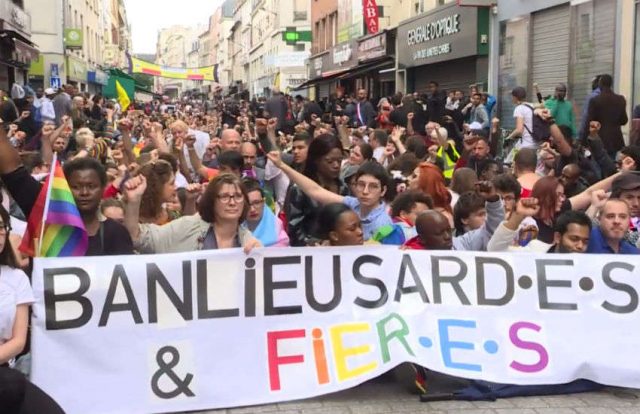 France held its first ever suburban gay pride rally on the outskirts of Paris on Sunday.

Thousands marched in the event, which took place in the working class suburb of Saint-Denis.

Organisers hoped the event would encourage people to stand up to homophobia. It also aimed to change preconceptions about life and attitudes in poorer neighbourhoods.

The local council backed the march. And the suburb’s town hall along with pedestrian crossings were decked out in the colours of the rainbow flag, .

It was the first time a gay pride rally had been held exclusively in a French suburb, rather than a major city, the organisers said.

‘The majority of the discourse about homophobia in the suburbs isn’t against homophobia, but against the people who live there, who are portrayed as LGBTQI-phobes,’ Luca Poissonnet, one of the co-founders of the association Saint-Denis ville au Coeur, which organized the march, told the AFP news agency.

Although France has advanced LGBTI rights in place, there have been a number of homophobic attacks in the European state.

A record 231 cases of physical aggression were recorded against people in the LGBT community in 2018, according to French support group SOS Homophobie.