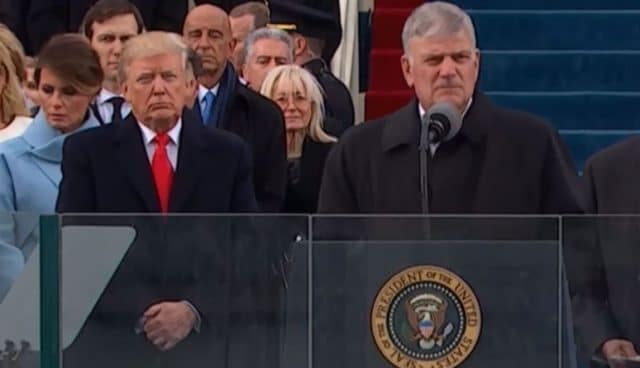 Evangelist Franklin Graham claimed in a new interview that “God” was behind helping President Trump win the 2016 presidential election.

“I think God was behind the last election,” Graham told conservative news site The Western Journal.

Graham, the son of the late prominent evangelist Billy Graham, bragged that Trump has accomplished a lot “without a fully supportive Republican majority.”

“He, of course, has been able to do it with the relentless attacks of the Democrats,” Graham continued. “He may go down in history as one of the best presidents we’ve had.”

The Christian leader has previously cited Trump’s policies as proof that the president is a true defender of Christian faith.

“I think he has honored his commitments to the faith-based community,” Graham told the outlet. “He is pro-life, [the] first president really in my lifetime that has been this vocal about life. I certainly appreciate that about him.”

“He’s put two Supreme Court justices so far on the bench that are conservative. He’s appointed a number at lower courts. I hope that he’ll be able to do even more in that area, because that will have an impact on my childrens’ lives. If we have the right judges, it will benefit all of us.”

Graham is the president of the evangelical organization Samaritan’s Purse and the Billy Graham Evangelistic Association.

“I think if Christians pray, pray for the president and pray for his administration, I think God will honor their prayers,” Graham told the outlet.

Earlier this month, Graham celebrated news reports that the Trump administration had denied multiple requests from U.S. embassies to fly the LGBT Pride flag on their flagpoles for Pride month.

In a post to his Facebook page, Graham personally thanked Trump and Secretary of State Mike Pompeo for “making the decision not to fly the gay flag over our embassies during June in recognition of gay pride month.”

It was the “right decision,” Graham declared.

“The only flag that should fly over our embassies is the flag of the United States of America,” Graham continued.

“The gay pride flag is offensive to Christians and millions of people of other faiths, not only in this country but around the world,” he claimed. “The U.S. flag represents our nation—everyone—regardless of race, religion, or sexual orientation.”