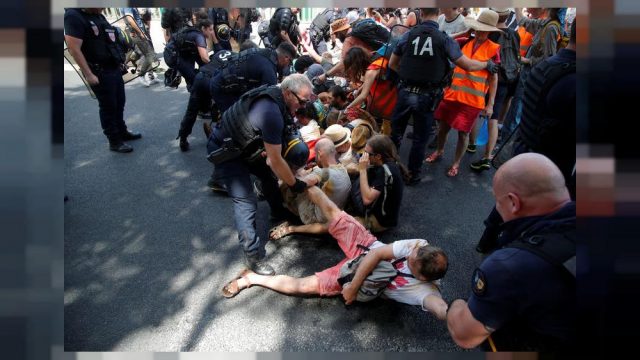 French prosecutors said on Monday they had opened a preliminary investigation after police used riot shields and pepper spray to clear scores of climate activists blocking a bridge over the Seine in Paris last week.

The probe is to be carried out by the national police force’s internal inspectors, prosecutors said.

The government is facing criticism for the heavy-handed break-up of the sit-in by protesters from Extinction Rebellion, a civil disobedience movement that began in Britain.

The protesters had blocked traffic on Friday on the Pont de Sully bridge in the centre of the city in the latest example of a surge of climate activism across northern and western Europe.

Interior Minister Christophe Castaner called on Monday for light to be shed on the incident after images emerged on social media of riot police dousing protesters with pepper spray and dragging them away.

Extinction Rebellion describes itself as a non-violent direct-action group. It has carried out a number of high-profile protests in London, including disrupting road and rail travel as part of its efforts to raise awareness of climate change.

In March, tens of thousands of climate activists marched through Paris. Since late last year, France has also been coping with large and sometimes violent demonstrations by the “Yellow Vests”, a social movement opposed to President Emmanuel Macron.