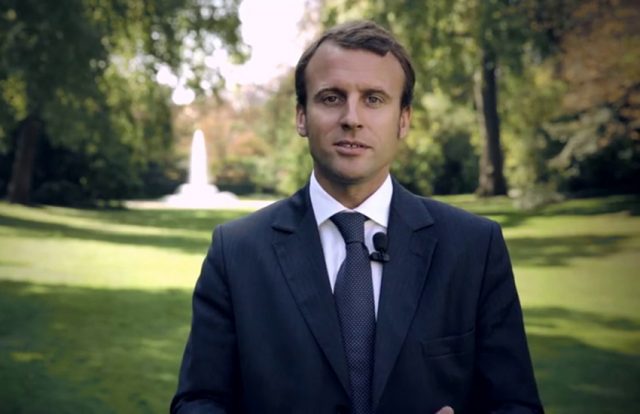 A hopeful to become French president Emmanuel Macron has denied he is cheating on his wife with a man.

The En Marche (On The Move) leader is gaining traction in the polls. It looks like he may defeat one of the far-right candidates campaigning on Euro-skepticism, Islamophobia and homophobia to become president.

But after being accused of being a puppet of the ‘wealthy gay lobby’, the marriage equality advocate has laughed off the gay rumors.
Numerous reports have claimed he is having a relationship with Radio France chief executive Mathieu Gallet.

‘If you’re told I lead a double life with Mr Gallet it’s because my hologram has escaped,’ Macron said, in a reference to a rival candidate making an appearance as a hologram at a rally last weekend.

A spokesperson for Macron said the comments were ‘a clear denial of the rumors’ about his private life.

Macron is married to his former school teacher Brigitte Trogneux, 24 years older than him.

Until recently, it seemed likely the presidency would go to a right wing-candidate – either Marine Le Pen or François Fillon.

But Macron and his social-liberal party are gaining traction.

According to Reuters, the latest polls show him winning with 65% in the second run off, with Le Pen at 35%.

If Reuters’ prediction came true Fillon, who is currently engulfed over public money being paid to his wife, would have been knocked out during the first round.

Macron is seen as the most LGBTI-friendly politician in the upcoming French elections.

He supported marriage equality and is in favor of adoption for same-sex couples.