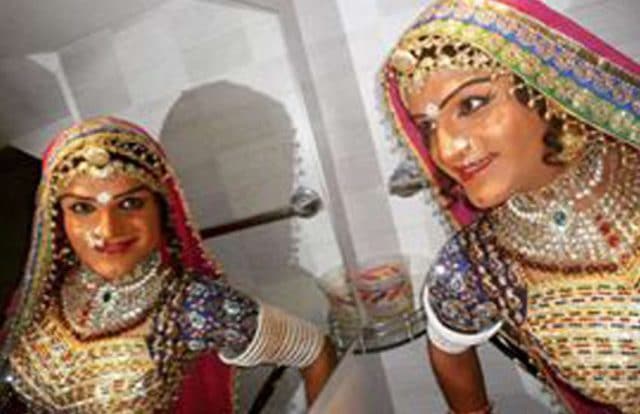 Friends of a this week have launched a fundraising campaign to support his family.

‘Harish was the sole bread earner and came from a humble background’ the fundraising campaign explains.

‘He’s survived by his wife and two young children. He also used to take care of his sisters.’

‘His family has no other source of income and were entirely dependent on him.’

Harish’s car hit a stationary truck on a highway near Jodhpur,

The crash killed Harish and three other performers.

Queen Harish, whose birth name was Harish Kumar, was celebrated for his performances.

‘His death is a big loss to the field of folk art’ said state chief minister Ashok Gehlot.

‘Dedicated to the folk art and culture of Rajasthan, Harish gave a new identity to Jaisalmer with his different dance style. His death is a big loss to the field of folk art’.

Harish had been dancing since he was a child. After his parents died when he was 12, he faced ridicule when he performed each night to provide for his siblings.

His big break came when he traveled to Europe and met other dancers. Despite widespread conservativism, his feminist energy in his performances gained him nationwide notoriety.

He said Harish was ‘one of the first artistes in India to celebrate DRAG as an art form and be proud of the Indian Flavour in drag’.

‘It pains me to type this. It’s a great loss to all of us and more importantly to the stage’ Divigikar wrote.

‘We have lost one of our very best. Your legacy will live on forever.’

Many fellow performers from across the world had left messages of condolences on Harish’s Facebook page.

‘I will remember Queeny Harish as a strong and humble being, young, decent and elegant man with a very firm and strong voice’ wrote Ute Marke.

‘Voice of the underprivileged, changemaker against all odds’ they also said.