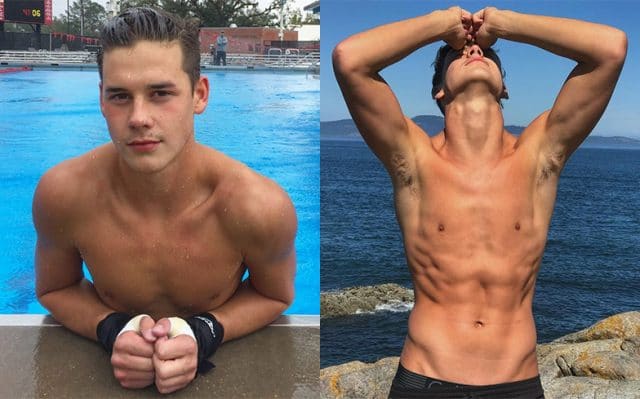 Coming out is hard, especially for those in the world of sports.

19-year-old university student Aidan Faminoff, who hails from British Columbia, is a Florida State diver who won a bronze medal on platform at the 2016 Canadian Olympic Trials.

He’s also an out and proud sporting icon for the LGBT+ community – but things weren’t always that way, as he revealed during his coming out story to OutSports this week.

“I have known since sixth grade that I was gay. I never felt comfortable enough to talk to anyone about it until I was in college. I was confused as to why I was attracted to men,” he wrote.

“My friends and I would be gathered around our high school in British Columbia, and I would get sick of hearing the guys catcalling and talking about the cute girls.

“I wanted to scream because I wanted to be able to talk openly and freely about my attraction to men. I just wanted to let out the feelings and emotions that were building up.”

Aidan recalled how he found relief in his daily diving practice after school, but was “still hiding” his true self from those around him – until the last few weeks of high school, where he came out to some friends.

“I saw one of my closest female friends be loving and happy with her girlfriend,” he continued. “I wanted to feel this way, comfortable in my own skin. She was an inspiration to me and made me feel confident.”

But when he started college at Florida State, things felt different, and he decided to come out to family, friends, and ultimately the whole world via social media on National Coming Out Day last year.

"Those who live with courage may not live forever, however those who live in fear do not live at all" So I guess this is the last step.. After hiding this for years I finally feel comfortable in my own skin, to be who I truly am. It has been emotionally tough not being able to talk about it with anyone but I feel ready. To the people who don't know, I am gay. It's weird and unsettling that I have to classify myself. It's time for people to know and I'm proud of it. Since being in Florida, I have been open with everyone here and it has been the best experience of my life. Not looking for attention or sympathy just wanted to get this off my chest and finally express how happy I am to be me. Love you all ? #nationalcomingoutday

“I went to a high school that was filled with boys who thought they ruled the world,” he remembered. “I felt that if I came out at any moment I would be singled out and judged.

“In college the environment is different. It feels more welcoming. Even though I have encountered obstacles, I have persevered.

“Coming out has made me a better athlete because I am more comfortable and coming into my true self. I am growing into the person I always wanted to be, and this has corresponded with my attitude about diving.

“Luckily, I am blessed to say that both my parents accept me. Having such a supportive family is the reason coming out was much easier than I thought.”

“If there was one piece of advice I could give any person, regardless of age, gender or sexuality, it is to be yourself and to not let anyone else bring you down,” he said.

“This is your life, so own it and live how you want.”