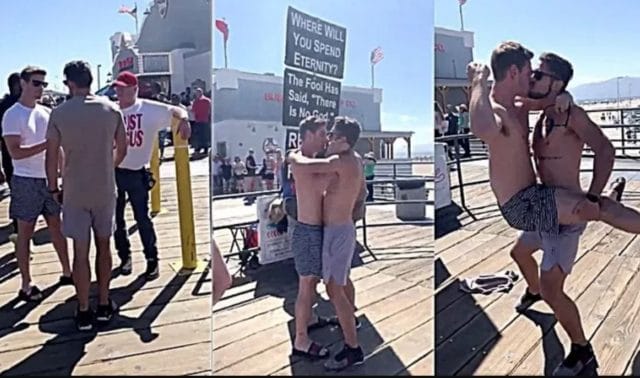 The homophobic group of Bible-bashers could be heard yelling into a megaphone about eternal damnation and hell at passersby.

One of the preachers wore a “TRUST JESUS” t-shirt while the other held a sign that read “Where will you spend eternity?” and “Repent or perish.”

Colle tweeted that they asked the religious extremists how they could be forgiven for their sins.

“So @michael_delray and I asked these Anti-Gay preachers how to be forgiven for our sins,” Colle tweeted. “‘There’s no helping you guys’. he says…Well. Might as well enjoy it then.”

In the tweeted video, the two men begin a steamy makeout session where they eventually take off their shirts and give the preachers a show they will never forget.