Home Gay Stars Gay baseball player comes out to his mom, and the world, live... 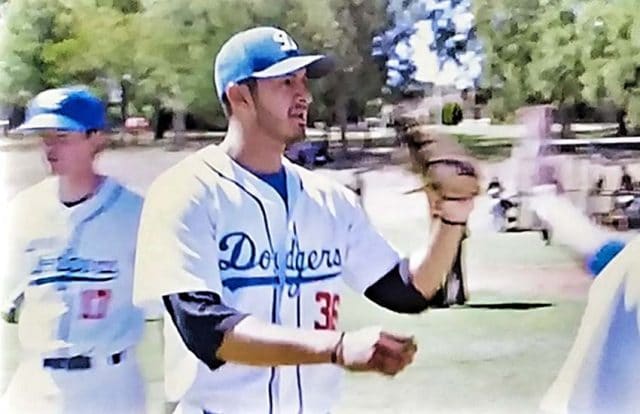 Ryan Jordan Santana, who played at a Christian university in California, is a professional for the Golden Grove Dodgers in Adelaide, Australia.

He came out to his teammates and his mother for the first time as part of TLC’s series This Is Life Live.

On the show, the host asked Santana ‘why come out to your family on national television.’

‘I feel like I struggled with it, and I know there are others struggling with their sexuality as well,’ Santana said.

‘And I feel like I don’t want them to feel alone or by themselves. And i want to let them know they are not alone. I want to be some kind of outlet, a light.’

Having played at Azusa Pacific University and St Mary’s Catholic High School in Phoenix, Arizona, he was in schools that specifically barred gay sex.

Speaking to Outsports, Santana said Azusa Pacific ‘was a tough spot for me because I do believe in God. It was challenging time for sure.’

He first realized he was attracted to men at 15, but kept it a secret.

‘I lived a lie my whole life. I was always too afraid to even tell my teammates. But I don’t want to have to lie to them about this part of me anymore.’

He said he was unable to say the words “I’m gay” out loud just 10 months ago.

During a recorded meeting, his teammates said they would be ‘mates for life’.

‘It doesn’t change anything between our friendship,’ Santana’s roommate said.

And when Santana told his mom, she was far more understanding than you might think.

‘I’m accepting of anything and everything with you boys,’ she said. ‘You’re still you.’

Have a ? for Ryan after he shared his secret on #thisislifelive? Reply & it may be answered in the After Show on https://t.co/torpg8Gllg pic.twitter.com/0ozVogP4fT