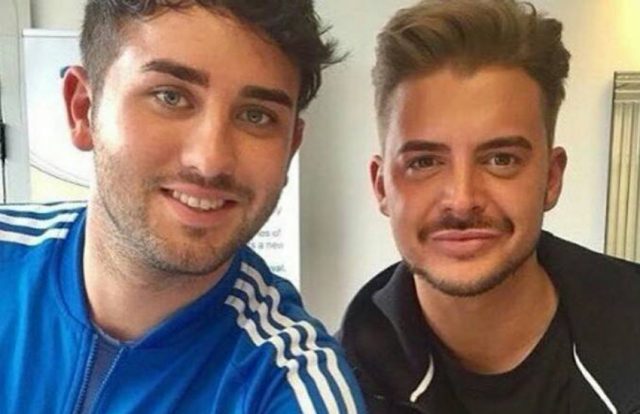 Couple who met on Big Brother say they were attacked

Hughie Maughan, star of Big Brother and Dancing With The Stars Ireland, has claimed he was attacked in an alleged homophobic attack in Dublin yesterday (29 January).

The gay reality TV star went to an awards show and an after party with his Big Brother co-star and fiancé, Ryan Ruckledge, when he says a ‘bunch of lads’ confronted them.

Can’t believe what happened last night me and Ryan went to an awards in Dublin and ended up on a night out and a bunch of lads launched a homophobic attack on us..’ he wrote on Facebook.

‘Ryan’s foot is broken as well.’

Explaining more, Maughan told that they had been drinking in nightclub Lillie’s Bordello before heading home at 3am. When they walked along George Street to get a taxi, a group of four or five guys and one girl saw them.

‘We walked by them and they shouted after us. One of them called me a cunt and the others used some really derogatory homophobic terms. It was awful,’ he said.

Maughan says he has cuts on his head and bruises all over his hands, while his head was badly swollen from the beating.

‘I have a lump on the side of my head from where the girl pulled some of my hair out. I also have a cut above my eye. We tried to defend ourselves and fought back.

‘Thankfully, though, some of the security guards from nearby shops and clubs stepped in to help us. We eventually managed to get away from it and get a cab home.

‘I’m sore all over but I feel really shaken by the whole thing.’
Maughan and Ruckledge have not yet reported the incident to the Gardai.