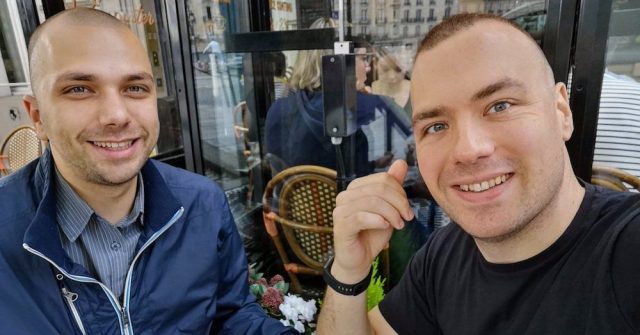 A 32-year-old Welsh boxer named Anthony Ash proposed to his boyfriend of 11 years this weekend after securing his first victory.

Ash had previously studied the Israeli self-defense martial art of Krav Maga as a way to defend himself from would-be homophobes. But more recently, he’d been training for months with Elite Fitness boxing gym and fought in two previous matches, but he’d never won a match until this last Saturday, June 15.

After winning the match, Ash took the mic and turned to his boyfriend who was standing in the ring.

Ash said, “My best friend here, my partner, my love, Yanko,” retrieved a ring from someone standing ringside, and then got down on one knee to propose.

Yanko, standing in the spotlight, held his face in disbelief and accepted while the audience applauded and cheered.

Here is video of the proposal:

Last night was the biggest night of my life

And he said yes!!! #LGBT pic.twitter.com/RkuEhiKs9X

“I’ve been planning the proposal for awhile. Taking up the boxing has been a massive thing in my life. [My fiancé has] seen the positive things around it and has been such a support. I’ve been doing a lot of work around changing people’s perspectives of the LGBTI community and boxing and bringing them together. It’s a part of his life because he’s so supportive. It was such a big deal for me and him, and doing it front of 350 people.”

In a March 2019 personal blog post, Ash explained why he had taken up boxing as a gay men:

“Taking up boxing was a turning point in my life. In the years before I first put the gloves on, I wasn’t in a good place at all. I had no confidence, I lacked any self esteem and I was constantly anxious.

“Why? There is a wide variety of causes but for me the number one was my sexual orientation.

When Ash first came out, he says he felt like he didn’t fit into the gay community either, but as he began boxing, he wrote, “I started sleeping better. I cared less what other people thought. I felt like I finally started living.”

Ash told Gay Star News that he has never experienced any homophobia in the world of boxing. “When you get in the ring, it doesn’t matter who the other person is,” Ash said. “What matters is what you’re able to do.”