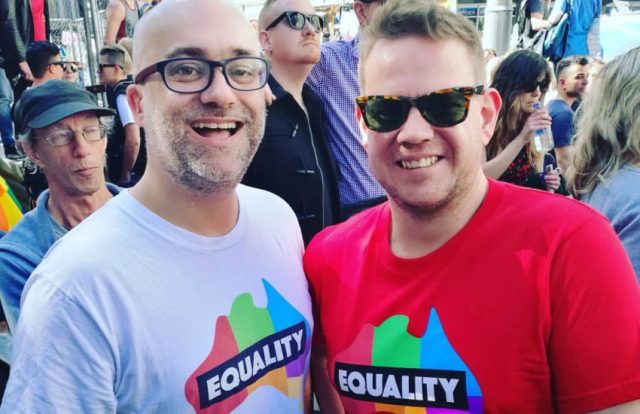 The mail said if same-sex marriage is legalized, women will be more likely to be raped in public toilets

Benedict Brook is a Sydney-based journalist who has been in a relationship with his partner Cameron for more than 10 years.
Here he shares their reaction to receiving an anti-marriage equality leaflet in the mail during Australia’s postal survey on the issue.

Lying among a pile of envelopes on the living room table, it looked innocent enough.

Between a bill and a magazine, it was a just another plain piece of paper. Photocopied, black and white with Chinese text on one side, English on the other.

I live in a diverse area of Sydney, and our household often gets pamphlets in different languages. Perhaps it was something from the council, I thought? Maybe our rubbish collection day was changing?

No, it was something far more insidious. It masqueraded as a campaign letter for the same-sex marriage debate. But in reality it was something else — it was homophobic, and transphobic, hate mail.

I’ve been reporting on LGBTI issues for 20 years — I’ve been gay even longer — so I’m pretty thick skinned when it comes to this kind of stuff.

But this piece of paper was something else. It said that if my relationship, a relationship I’ve been in for more than a decade, were recognised as marriage then women would be raped in public toilets. I kid you not.

Here is the actual sentence from the leaflet. ‘The number of victims being raped in public female bathrooms in those countries that has passed the same-sex marriage law is a stunning fact to all.’

It’s not a ‘stunning fact to all’. It’s garbage. It’s a lie meant to smear gay Australians and scare my neighbours into voting no. Voting that is happening right now.

That was not the only objectionable item in the letter that was posted across my suburb. Lines about ‘homosexuality being the curse of death’ and terminating ‘the family bloodline’ as if gay people will suddenly turn straight and push out some kids if marriage is denied them.

But the rape bit, that was the real kick in the guts.

Throughout this tawdry campaign, some ‘no’ campaigners have shouted loudly and clearly, so everyone can hear, about how they’ve been apparently silenced.

They’ve been bullied by some comments online by intolerant yes campaigners, they claim.

Yet, when horrifically homophobic material appears — posters suggesting gay people are abusers, for instance — some commentators have suggested gay people themselves created them. It beggar’s belief.

On Wednesday, prominent ‘no’ campaigner Lyle Shelton said ‘homophobia doesn’t exist much in Australia’. Lyle, I appreciate your straight perspective on gay hate, but I can assure while most Australians are good people — homophobia does exist. I know because it invaded my home.

What came through my door was real, it was anonymous and it was nasty. It was the opposite of respectful debate.
Coming out to the neighbourhood

So, with some trepidation, my partner Cameron and I, decided to do something about it.

It would mean confiding in our neighbours, some who we only know through a cheery wave in the street, and trusting they would treat us with the respect the leaflet’s creators had failed to do.

We decided to come out as gay to the whole neighbourhood. As every gay person knows, coming out isn’t something you do once. In fact, every time you meet someone new at some point, inevitably, you have to tell them you’re gay.

I’d just never told a whole neighbourhood before, en masse. There’s always the worry you’ll be shunned. Or worse.
But what choice did we have? The alternative was to stand meekly by while persons unknown tried to make our neighbours fear us.

We created a response to their hate mail. Just like the original it was black and white, in English and Chinese.

But there would be some differences. It would be respectful, we would be truthful and we would not, coward like, hide our identity.

We like to think of it as not hate mail, but ‘great mail’. And we posted it to hundreds of our neighbours.

‘Our names are Ben and Cam — we are your neighbours. We enjoy eating out in the neighbourhood, you may seeing us hopping on and off the bus and we like to try the free cheese samples at the IGA,’ we wrote.

‘We are also gay. We didn’t feel the need to make a big deal about that but the contents of that leaflet were so hurtful, so shocking — and so false — we felt we needed to reply.’

Don’t vote based on fear

We didn’t presume to tell people how to vote. But we did ask them to think about that choice carefully. Of course, we hoped they’d come down on our side.

‘Whether you vote ‘yes’ or ‘no’, please vote on the simple fact of whether two people who love one other should be able to demonstrate that love the same way everyone else can. Don’t vote due to fearmongering and lies.’

Cameron and I shouldn’t have had to do this. We shouldn’t have been forced to come out to our entire neighbourhood just to prove gay people aren’t the monsters they’d been told we were on that piece of paper.

But that’s the position we’ve been forced into by politics and pamphlets.

I hope my neighbours will still wave to me in the street.
This post first appeared on news.com.au and has been republished with permission.