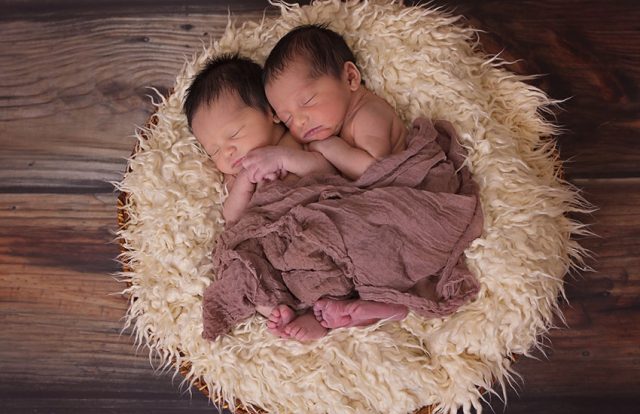 ‘We love her very much and we will never forget her. To us she is our first child and we are blessed to have had her with us for 13 days’

A gay couple in the Netherlands has to give their two-week old baby back to the mother after a DNA test showed none of them is the father.

Arnout Janssen and Stefano Franke hired a surrogate so they could have a child.

She also agreed to only use protection with her husband, so he would not get her pregnant.

Little Hayley was born on 8 May, and her dads were over the moon with joy.

But now they have to hand her back to her mom, because it turned out neither Janssen nor Franke are the little girl’s father.
She is, instead, the surrogate’s husband’s baby.

It was discovered by a DNA test, which is part of routine court proceedings to finalize the adoption, the couple wrote on their blog.

When they told the surrogate couple, they were just as shocked as Franke and Janssen, they said.

‘They asked us if we feel it changed anything about Hayley,’ the couple said.

‘And we told them no, she is our daughter and DNA changes nothing about that.’

Hayley’s biological parents said it was fine by them, and the couples wanted to meet the next day (18 May).

But the surrogate and her husband dropped out of the meeting and instead, they met at the court on 19 May.

‘We already knew it was not good and we were going to lose Hayley. The hearing did not really stand for much,’ the couple said on their blog.

‘Childcare told us Y & U [the surrogate and her husband] had decided to take care of Hayley themelves and after this Arnout and me got into a small room to let our emotions out and talk, just the two of us.

‘After this Arnout got into a room with Y and Discussed how to continue.’

They wanted to take their daughter home the same afternoon, but Franke and Janssen managed to push it back until the following day, so they could say their goodbyes.

‘We are completely devastated and do not really know what to do. Somewhere I totally get that she is going to live with her biological parents an brothers and sister but we are so sad That we have to be going to miss her,’ Franke said.

‘We feel like months of our lives have been taken away from us, as well as money, her names we wanted to give to OUR child, and of course Hayley!

‘We do hope Hayley gets all the attention and love she deserves, and we hope she grows up to be an amazing woman.

‘We love her very much and we will never forget her. To us she is our first child and we are blessed to have had her with us for 13 days.’

Under Dutch law, everything in regards to adoption and surrogacy is based on ‘the mother’s willingness and good faith’, Janssen told Dutch newspaper AD.