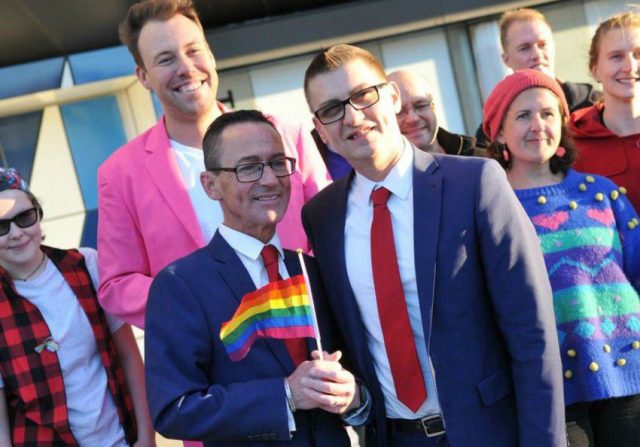 ‘It was beautiful and I hope Margaret Court sees it.’

Two long-time marriage equality advocates were ‘illegally married’ outside of the namesake arena of tennis legend Margaret Court.
Court, 74, was one of the world’s greatest tennis players, winning 24 grand slam titles in her career.

But she has courted international media attention in recent years for her controversial stance on LGBTI issues. Most recently she boycotted Qantas airlines because its CEO supported marriage equality. In May, she compared trans children to Hitler and said they were the work of the devil.

Her statements caused an outcry and backlash came from around the world including tennis greats, Martina Navratilova and Andy Murray. Many called for the arena named after her in Melbourne to be renamed.

Antony McManus and Ron Van Houwelingen and other LGBTI advocates staged a colourful protest outside of Margaret Court Arena today.

The couple were ‘illegally married’ by James ‘Breko’ Brechney the founder of the DIY Rainbow movement. It was the 14th time the couple were married in a fake ceremony to protest the lack of marriage equality in Australia.

The protestors descended on Margaret Court Arena on a mission to make it ‘fabulous’. They used chalk to create a giant rainbow and pro-LGBTI messages on the pavement outside of the arena.

‘What we’re doing today is having a colourful celebration out the front of Margaret Court Arena for the end of Pride to make a point that our community is proud and not going anywhere,’ Brecko told Gay Star News.

‘Margaret made some pretty bizarre statements last month but she’s also been lobbying the government about their appointments. So I think it’s really imperative we keep the pressure up on her and her anti LGBTQI views.’

Brecko said arena management and Victoria Police had been supportive of their plans.

‘What’s really sad for me is how irrelevant Margaret Court should be in the Marriage Equality debate yet the mainstream media have seemed to give her a front row seat,’ he said.

‘I really couldn’t care less what an ex tennis player feels about my relationship and it’s value and either should anyone else.

‘It was beautiful and I hope Margaret Court sees it.’