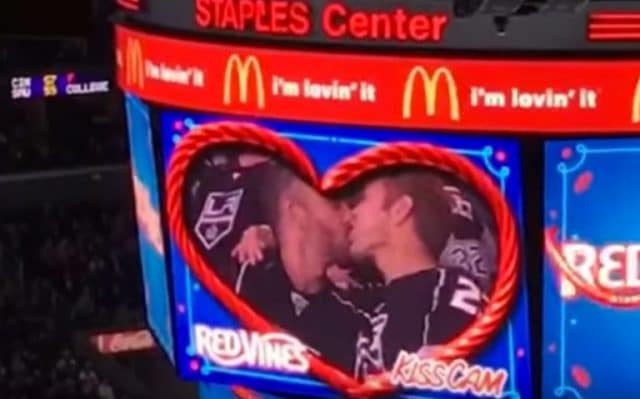 Two men were subject to humiliation and homophobic abuse after they shared a kiss at an ice hockey fixture in Sheffield.

David Simms, an executive and public announcer at the Sheffield Steelers, ordered for security “to get rid of them” and deemed their kiss as “disgusting”.

The kiss-cam – which is a popular trait at American sporting events – was selecting couples to win free tickets as Simms made the derogatory comments about the pair.

He later justified his comments, telling BBC Radio Sheffield: “Maybe I live in a different world. I can’t really see the offence I have caused.

“But if people have been offend… people who know me know I don’t like to offend. I am truly sorry if I did do.

“Unfortunately the world has moved on to a place that either I haven’t realized it’s got to or I am comfortable with.”

Hundred’s of angry fans took to Twitter to voice their disgust with Simms.

Surely it's now time for @officialEIHL to kick the racist homophobe David Simms out. Please do the decent thing. No place for either today!

@Simmsey "I genuinely meant no offense" is not an apology. How about "I realise what I said was unacceptable and apologise unreservedly".

Simms confirmed that the LGBT+ community had offered him counselling and has suggested he would consider their invitation.

Sheffield Steelers also issued a statement on the matter and reiterated no offence was intended.

The statement said: “In no way did Mr Simms intend what was said in a derogatory or offensive way.

“The club and the EIHL has been in touch with LGBT direct.”