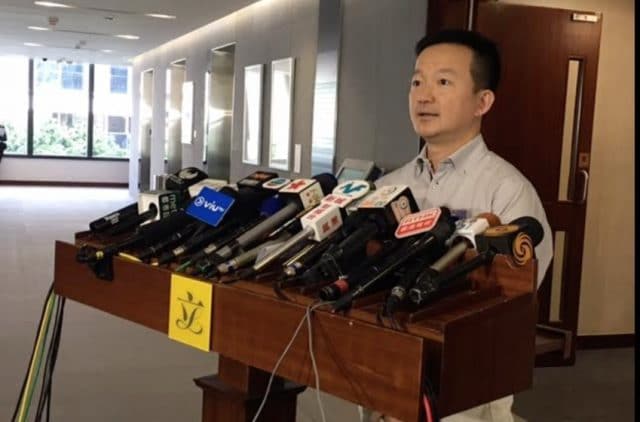 A gay, married civil servant has won a landmark court case to receive the same benefits as heterosexual couples.

In 2015 Leung Chun-kwong sued his long-time employer the Civil Service Bureau and the commissioner of the Inland Revenue Department because they did not recognise his marriage. The Tax Department also refused to recognize their nuptials.

Leung married his partner of 10 years, Adam Scott, in New Zealand in 2014 and the couple live in Hong Kong.

He claimed the decision to refuse his access to the equal benefits were unconstitutional and discriminated against his sexual orientation .

Leung has worked at the Immigration Department since 2002 and said he was entitled to the same benefits as straight couples.

‘At its heart, this matter concerns protection for the dignity of a historically oppressed class in our society – homosexual persons, a substantial portion of our society. Allowing discriminatory treatment against such a minority undermines the law,’ he wrote in a 100-page court document.

A Court of First Instance judge today rejected the bureau’s claim that it had refused Leung’s request in order to protect ‘the integrity of the institution of marriage’, according to the South China Morning Post.

The decision could have a massive impact on Hong Kong civil servants who were married in same-sex ceremonies overseas.
Hong Kong’s first openly gay legislator, Raymond Chan welcomed the judgement and called on the government to introduce same-sex civil unions.

‘I urge the government to consider [introducing] a civil union system which covers heterosexual and homosexual relationships. No department or bureau [is] willing to be in charge of this issue,’ he told media outside of the courtroom at today’s ruling.

‘I think because of the judgement of the High Court, our government at least should start the study and a consultation.’