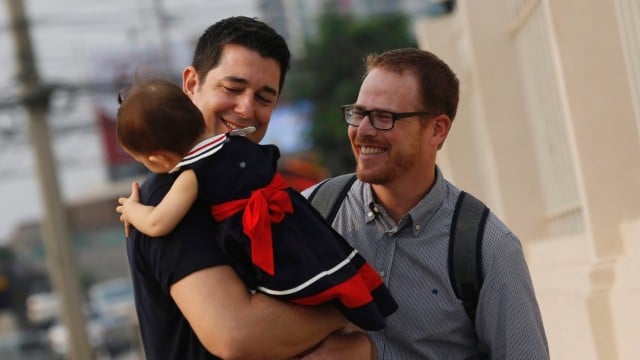 Do you remeber a couple of married gays, Gordon Lake and Manuel Valero, who has beed fighting recently their Thai surrogate for custody of Carmen, their 14-month old daughter?

A court of Thailand has awarded custody to a couple of dads after a high-profile battle with their Thai surrogate mother.

Patidta Kusolsang, who is a biologically unrelated surrogate mother of a newborn babe, refused to sign all the documents that could allow to give a passport to Carmen ten days after her birth. The mother refused to hand her newborn daughter over to her new fathers Gordon and Manuel.

Kusolsang explained her such decision: “I thought I would be helping a “legitimate” couple”. And finally she demanded 15-month-old Carmen back.

Gordon reaction was like this: “I was flabbergasted, in a complete state of shock. It’s your worst nightmare in a process like this. I didn’t believe it.”

So since Carmen’s birth in January 2015, Gordon had to stay and live in a secret location in Thailand. He was afraid all the time that Carmen would be taken away. His husband Manuel together with their two-year-old son Álvaro came back to their family to Spain.

Gordon claimed at the very beginning of the court proceedings: “We’re doing what we have to do to fight for our family. You don’t really think about coping with it, you just do what you have to do.”

But hooray! It happened finally! After long months of legal proceedings, a Thai court awarded gay dads parental rights, and now happy dads Gordon and Carmen are allowed to go home with their daughter.

“We are just overwhelmed with emotion. We always knew our story would have a happy ending and we just can’t wait for the four of us to be together again.”

Manuel said with tears in his eyes: “This nightmare is going to end soon, Carmen will be with us in our home.”

Now the couple is going to visit their relatives in Spain on their way home to the US.

Good luck, guys. Finally the whole family gathered together and they are extremely happy!