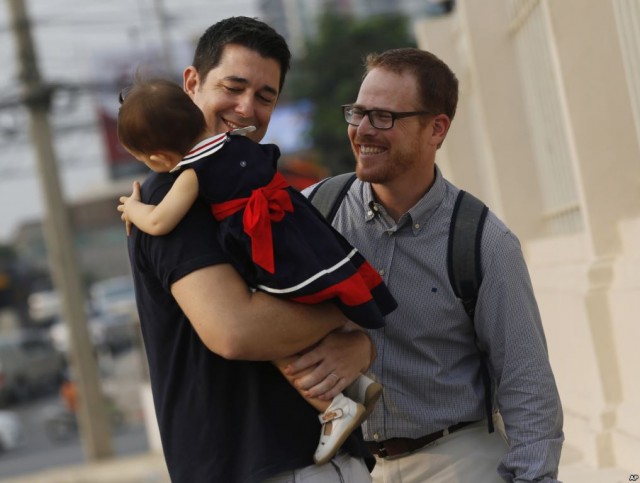 Gordon Lake (American) and Manuel Santos (Spanish) are an ordinary gay couple who wanted to be parents and decided to hire a surrogate mother in Thailand, country where it was legal to do so at the time they made the contract with the surrogate mother.

So, they traveled to Thailand and got their daughter. But when the mother Patidta Kusolsang knew the couple was a gay one sent a message to their cell phones stating she changed her mind and will keep her daughter because they were not “an ordinary couple” and they can’t be natural parents.

The case got really complicated for the couple because at the time of the birth Thai laws banned commercial surrogate births because of a couple of scandals. Furthermore, Thailand does not recognize same gender marriages so, they are not an official couple there.

The legal battle started past year and it took a very long time due to the complications of the case. The mother officially sued them for child abduction even though the Thai authorities decided Carmen (the name of the little girl) should stay with the couple until the court of law is finished because it is the best for her.

So they were living in Bangkok, moving every month from one place to another in fears that the authorities will change their minds and will take Carmen away from them. The case was all around the Thai media and most people side with the couple, because they were much better parents for a little girl than somebody who changes her mind because of the sexual orientation of the couple who hired her.

Carmen got an American passport because Gordon Lake was her biological father but despite that, without the consent of the mother Carmen could not leave the country so, the only thing they could do at the moment was to wait and keep with the legal battle while they keep raising Carmen as their child.

But it all came to a happy end day 31st of March when the court of law ruled that Gordon Lake will keep the sole custody of Carmen and he could leave the country with her daughter without the consent of the mother as soon as she rejects her right to appeal. Great news for them, for Carmen, for the gay community and for anybody with a little common sense.