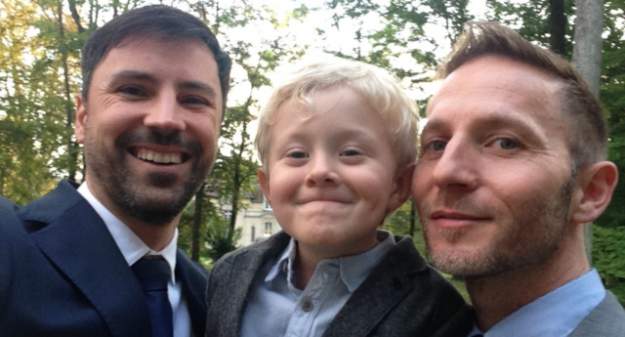 As if our community didn’t have enough problems, it seems some couples may have to divorce in a very bizarre twist of events across the pond in the U.K. and France.

Per PinkNews, at least a dozen loving same-sex couples have been told that they need to get divorced if they want legal rights. It is a confusing and annoying legal tangle between the French and British governments.

Take for instance Leandro Barreto and Francois Souyri, who are approaching their tenth wedding anniversary. They first entered into a civil partnership back in 2008. The London couple also adopted a son, who will be seven in November.

Here’s where things get complicated. The family considered moving to Francois’ native country of France, however, they got caught in a conflict that culminated in officials telling them that they need to get divorced.

Leandro, a 43-year-old game developer, told PinkNews: “That’s not something we can do; it’s not an option for us…we’re just caught in limbo”.

Here’s how its broken down. Both France and the UK allow same-sex marriage, so recognition shouldn’t be an issue – but the couple are one of many who have fallen through the cracks between the two systems, leaving their entire family in an uncertain legal situation.

It gets worse. The lack of recognition for their marriage means that their son’s adoption is also not legally valid in France.“He cannot be adopted just by François because we’re both his parents, and he cannot be recognized as both of ours because they don’t recognize our union.”

They aren’t alone in this misery. Leandro and François found several other couples who were in the same situation, and they formed a Facebook group to discuss the problem. Because of all of this, the couple is suing the French government, in a string of actions to find a solution to this.

No further response has been given from the ministry, and the couples remain in this weird limbo. Read more about the situation here.