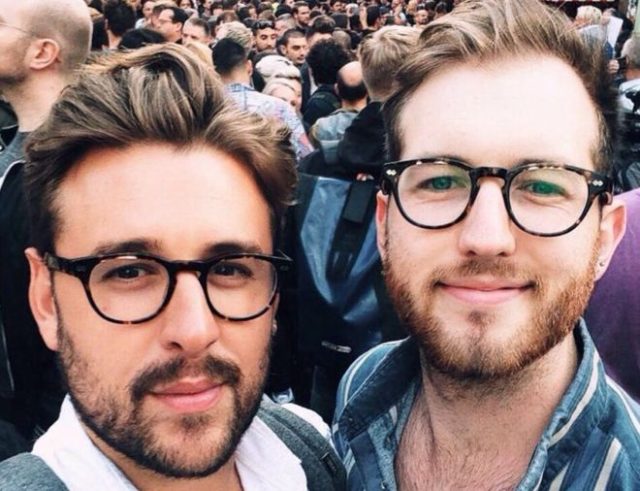 A gay couple who held hands in a supermarket have expressed their anger after a security guard told them they were acting inappropriately.

Thomas Rees and Joshua Bradwell were in a Sainsbury’s store in Hackney when the guard told them a woman had complained about their behaviour.

“It’s really knocked me for six and I’ve spent the last day or so analysing how I’m perceived,” said Mr Rees.

Sainsbury’s apologised and offered them a £10 voucher.

The 32-year-old said they were holding hands, and that he may have put his arm around his partner’s waist as they were buying their food on Monday evening.

“We weren’t celebrating good news, we weren’t all over each other, we weren’t in the throes of passion – it was essentially just holding my boyfriend’s hand as I do every day. I’m very much in love and that’s how I express my love,” he said.

After they paid, a security guard told them about the complaint after he beckoned them outside so they would not be embarrassed, which “aggravated it more”.

“I have nothing to be embarrassed or ashamed about. I shouldn’t be removed from the store,” said Mr Rees.

“All it’s done is strengthen the importance that if you love someone, irrelevant of their gender, that is love and you should express that love in whatever way you desire or wish to. ”

Mr Rees tweeted the supermarket giant and got a message back apologising and offering the voucher.

But he said he would like a phone call from them instead explaining how they train staff members to deal with diversity.

He added: “I do feel for the security guard because he was clearly unable or poorly equipped to handle these situations.

“He explained that he was brought up to believe ‘live and let live’ but he had to let us know that a complaint has been made and he kept repeating this complaint which was infuriating.”

A spokesperson for Sainsbury’s said: “We sincerely apologise to Thomas and Josh.

“We are an inclusive retailer and employer and do not tolerate discrimination in our stores.

“We will take appropriate action once we’ve concluded our investigation with our security contractor.”

Jo Wales, 35, contacted BBC News to claim he was also victimised at a Sainsbury’s store in Wimbledon when a cashier apparently refused to serve him and his male partner at Christmas and instead glared at them from two checkouts away.

He wrote an email to the supermarket giant’s CEO but did not hear back until about a month later, by which point he said he had moved on.

Sainsbury’s said it was unable to investigate this incident because it happened so long ago, but added it was not something which happened often.

Two years ago, a “big kiss” protest was held at a Sainsbury’s store in Brighton after a lesbian couple was asked to leave when one gave her partner a kiss on the cheek.