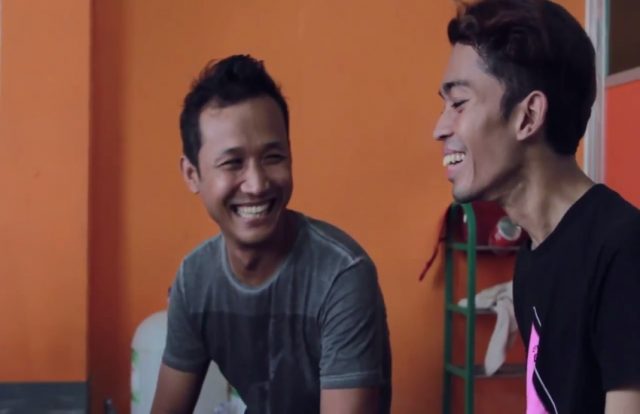 Like many couples who meet online Rick James and U Lay Sue were worried about meeting in real life for the first time.

‘Because you know the photo on the Facebook and then on the outside is very different. I didn’t know if he would accept me,’ James said.

The couple began chatting on Facebook while James lived in Singapore and met in person two years later.

Despite their worries it was love at first sight and that night Sue proposed. Two months later the men rented their own apartment and moved in together.

Sue and James live in conservative Myanmar where sexual activity between people of the same gender is illegal and LGBTI people face discrimination.

In a candid interview with advocacy site Not Only Voices the couple describe life as a gay man in Yangon, coming out to their families and the fear of police harassment.

Being gay in Myanmar

Myanmar’s LGBTI community has become a lot more visible since the collapse of military rule in 2011 with the country hosting its first gay pride celebrations in 2012. Many gay couples live openly together in bigger cities like Yangon and Mandalay.

The men say they feel free in Myanmar but they do not feel safe from police and their ‘security is not good’.

‘Here if you’re a trans woman it is more accepted than gay,’ James said.

‘In Myanmar because the general discrimination is high, the man is the highest, the woman is the very lower level. They believe like that, religion says like that.

‘So they believe the man who wants to be gay wants to go down to the equal level (of women). So they think ‘why do you want to be gay, gay is the very lower level’.’

Coming out in Myanmar

Sue believed his family accepted his sexuality because he supports them financially, but for James his family have been more accepting.

They also approve of the men’s relationship because Sue won them over with his charm.

‘He is very clever, he helped to my mum and helped to my dad and he do everything for the home so they accept him,’ James said.

But Sue’s mother did surprise the couple with her wise words.

‘His mother said if the two men together, are gay or stay together, it’s ok because love is important,’ James said.