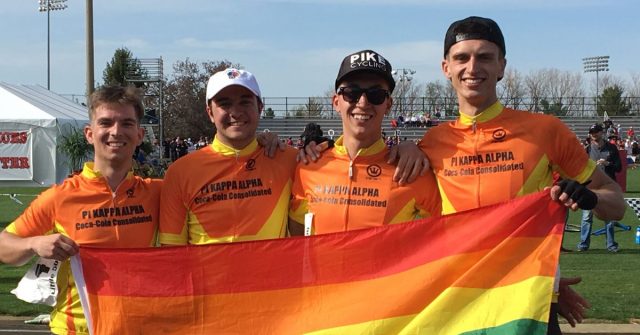 When I talk to my friends about why they joined a fraternity, most respond with something about the social aspect, usually “getting girls.”

Clearly that wasn’t the case for me.

Family members and older friends were involved in Greek life at different universities and I loved hearing their stories, so I always had some inclination towards joining a fraternity. Greek life is pretty big at Indiana University — I felt like I’d be missing out on the true college experience if I didn’t join a fraternity.

Regardless of which fraternity I joined, I knew I wanted to come out to everyone on my own terms. I didn’t really get to choose when I came out at Carroll High School in Fort Wayne, Indiana, because rumors of being the “gay kid” spread like wildfire. I didn’t want my family to find out through the grapevine, so I figured it would be better to own my sexuality rather than try and suppress who I am. I was fortunate to be welcomed with open arms and accepted by almost everyone.

Being pressured into coming out really set me back. I was struggling with my sexuality and trying to be comfortable with being gay, and next thing I knew I was the out gay kid at school. Girls suddenly became my “best friends,” my guy friends started acting different (not bad, just different) around me, all while I still hadn’t completely accepted who I am. Despite acknowledging my sexuality, being forced out made me want to suppress who I was just so things would go back to normal.

I acted as straight as possible so people wouldn’t suspect I was gay. Every night I wished I could change because I felt like I wasn’t good enough and that there was something wrong with me. It was a pretty dark time in my life, something many LGBTQ+ people experience, and I really didn’t know what to do. As clichéd as it sounds, joining my fraternity has helped me find myself, and has helped me be happy with whom that person is.

I wanted to be 100% sure that the guys liked me for me, not because I acted like someone I was not.

The spring of 2017 was when I rushed at IU. I felt like I had to prove myself because I was a sophomore, since freshman year is traditionally when people join fraternities. On top of that, I had my secret as well. I wanted to be 100% sure that the guys liked me for me, not because I acted like someone I was not.

I went around to a few different houses, but I really couldn’t see myself being a member at any of them. A few friends had joined Pi Kappa Alpha (Pike) in prior semesters and convinced me to swing by and see what the guys were like. My friends had known about my sexuality, so I made sure to ask how they thought brothers would take having a gay guy rush their fraternity. They assured me it wouldn’t be an issue, and they were right.

Besides my friends in Pike who already knew, the first people I came out to were my pledge brothers. I didn’t want to make it a big deal with any “I’m gay” speech, so I did it in a variety of nonchalant manners.

In one instance, when they asked if I had a girlfriend, I responded with a casual, “Nah, I’m into guys.” Another time I hosted a small party and made a point to not take down my pride flag. When they asked if one of my roommates was gay, I told them that it wasn’t any of them, but me.

I did the same thing with other brothers. I became more comfortable and I began to feel more confident being myself. It didn’t feel like I had a secret anymore. I was just one of the guys who took part in our philanthropic events, held positions in the fraternity and enjoyed the social life.

My sexuality wasn’t a thing — I was free to be who I was and do what I wanted without any fear of judgement. And that is a great feeling.

Watching the 2017 Little 500 with my Pike brothers was when I first became interested in biking. 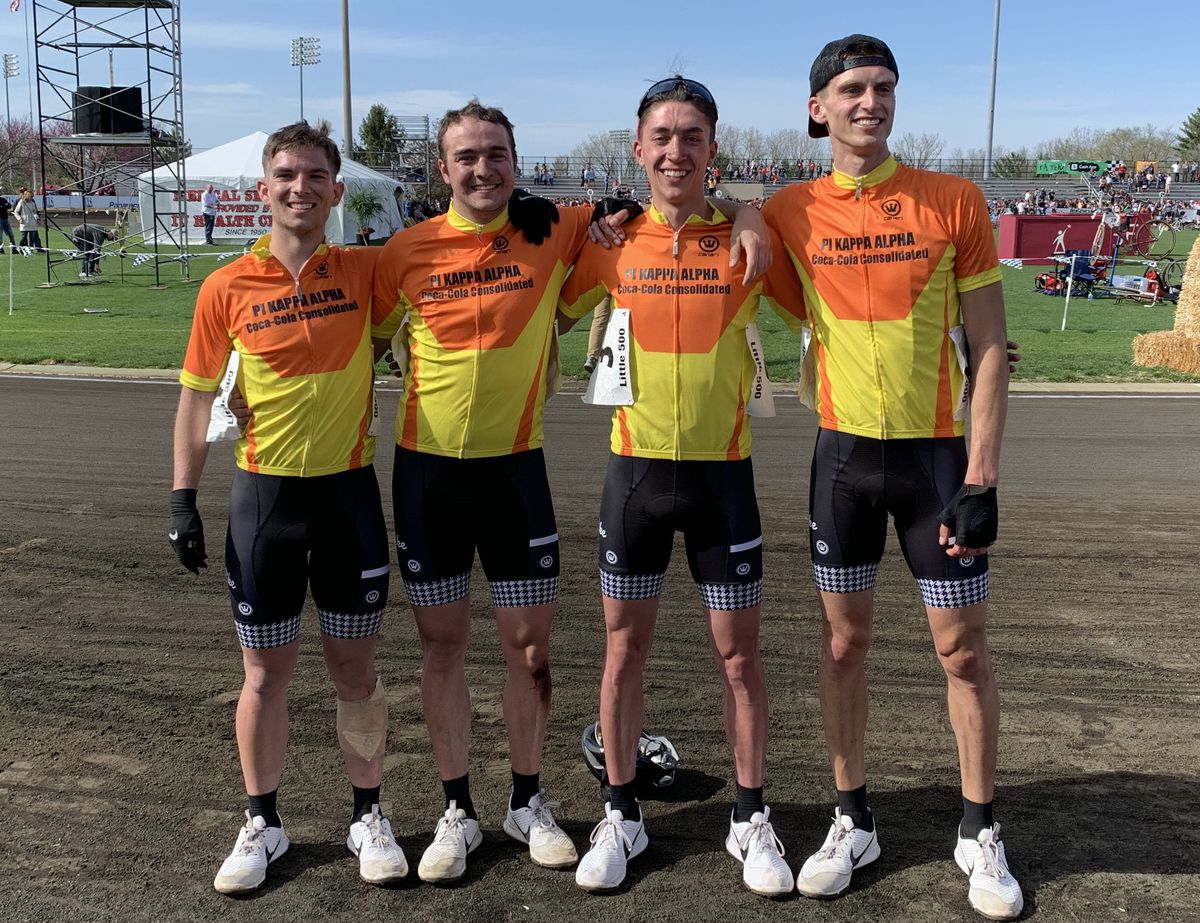 Dubbed the “greatest college weekend ever,” the Little 500 is a 200-lap bike race on a quarter-mile cinder track and raises money for scholarships awarded by the IU Student Foundation. Most kids party during the week, but I knew I’d rather be a rider and feel that competitive spirit again. I made a point to tell my best friend and Pike rider, Blake, that I was joining the team the following year. And so began the training.

Hundreds of miles and a few crashes later, I’d invested quite a bit of my life into biking. I felt confident that I’d secure one of the four spots on Pike’s team in the spring of 2018. I did not end up riding in the 2018 Little 500, because I had the opportunity to study abroad in Sydney, Australia. I knew that when I got back, the training would start back up and I’d be preparing for my senior year Little 500.

After months of training, qualifications (“quals” as the students call it) finally arrived. We had the 10:50 a.m. time slot, but all of us were up before 7 with the pre-quals jitters. As I crossed the line in the exchange zone, I felt an enormous sense of pride for our team but especially for myself.

Fraternity brothers and tons of friends were at the finish line cheering my name and saying how well I did. Nobody mentioned that I was the “gay guy in Pike” or “that gay rider” at all — I was applauded for my accomplishment, not my sexuality. I still struggle with my sexuality sometimes, but that specific moment was one where I felt an immense amount of pride in myself, for being out and proud and kicking ass in quals.

We ended up qualifying towards the back of the pack, slower than we wanted, but we knew we had the team to climb back into the race. We knew we had to train even harder so we would have the endurance and skill to become legitimate contenders in the race.

I was surprised at how well I slept the night before the race. As soon as I woke up, all of the nerves and excitement hit me at once. I kept telling myself that all of the blood, sweat and tears I’d invested up to that point prepared me to compete in the Little 500.

After one last team meeting to go over our race strategy, we went to the fraternity courtyard for the “rider sendoff” since we were heading over to the track. Friends, family and a hundred or so wildly drunk brothers all told us how proud they were and wished us luck. My family was able to make it down for the race, which was exciting but also stressful because I didn’t want to suck in front of them. Regardless, I knew they were proud of me for all the hard work I put in to get to race day.

On race day, April 13, it didn’t really hit me that I was riding in the Little 500 until I heard my name announced or team introductions. Talk about a shot of adrenaline — I could have run though a brick wall. I was our 3 rider, after my teammates Zen Zupin and Blake Jackson and ahead of Nathan Collier, so I had some time to watch the race before hopping in the pack myself.

My first time on the bike is something I’ll never forget. I was riding in a pack with 32 other guys, some four-year veterans, other rookies like me, riding fast and racing hard. I got a great burn (sprinting ahead of the pack when exchanging riders since exchanges are slower than race pace) at the end of my set of laps and exchanged with our last rider, Nathan.

One of my best (straight) friends even joked about “how nice my ass looked” in my biking bibs.

Friends and family were all cheering my name, which was one of the greatest feelings I experienced on race day. One of my best (straight) friends even joked about “how nice my ass looked” in my biking bibs.

The rest of the race is kind of a blur. All of the exchanges, cautions and burning legs went by very quickly. We fell off the main pack about halfway through the race, but we still pushed hard to make up ground. Fortunately, we had a clean race with no wrecks or penalties and ended up finishing 19th (a 12-spot improvement from our quals position). We wanted to finish higher, but everyone was proud of the effort we put out and knew that we left everything we had on the track.

After the race, countless friends and family members sent texts saying how proud they were of me and how much fun they had watching us race, which is the most prideful I’ve felt in a long time.

Fraternity brothers, ones whom I’ve always admired and looked up to, sent long paragraphs telling me how I was one of their role models for representing the fraternity in a positive way by just being myself and owning who I was. 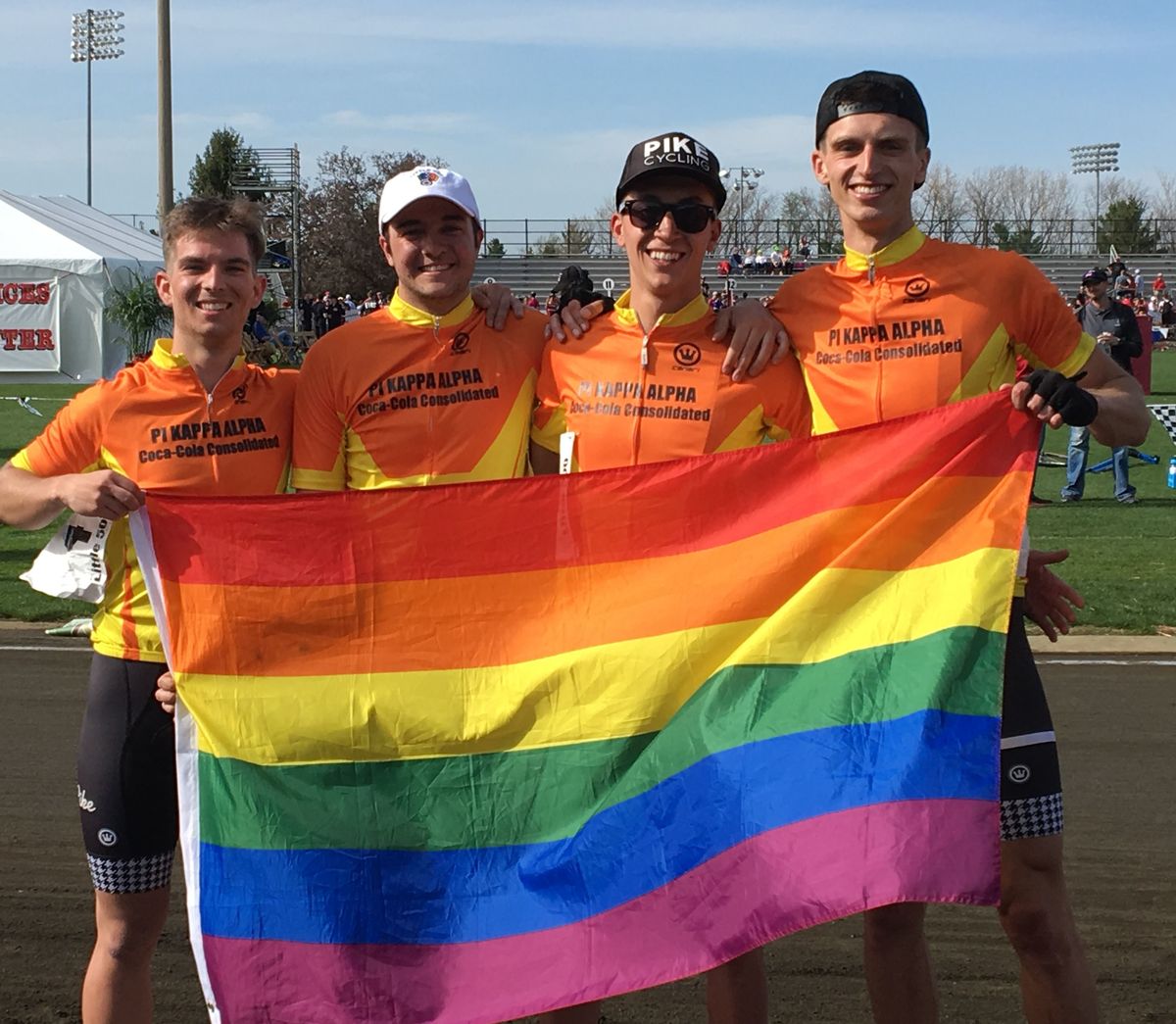 I had my pride flag packed in my bag so I could take a picture with it after the race. When I went to take the picture, my three other teammates walked over and gathered around me without hesitation.

To this day, I still don’t think they realize how much that gesture meant to me — it showed that they are supportive and that they really do have my back 100% of the time. Ever since I joined Pike, I didn’t want to hide myself, and the guys doing that really showed that I made a fantastic decision by joining Pike and being open with my sexuality.

That night, we partied like rock stars. We were the studs from the bike team, who just finished riding in the race from the world’s greatest college weekend. I was a Little 5 rider for Pike, not just the gay kid in Pike.

I’m fortunate to have had the opportunity — I made a memory that will last a lifetime, but I also showed that fraternities aren’t solely the macho douchebag jocks on campus. They’re a group of guys that embrace individual differences and support you in every way, whether that be with school, job searches, or in my case, being gay.

Dylan Harris, 22, graduated from Indiana University in May of 2019. He studied International Business and Supply Chain Management and will be moving to Fort Myers, Florida, for a sales position with Gartner. He is very involved in his fraternity, elected to serve as mental health chair and was on the new member education committee. He can be reached by email (harris.dylan329@gmail.com), Facebook, Instagram or Twitter.

Bonus: IU’s Sports Media produced a video of Dylan’s training for the Little 500 as an openly gay student: