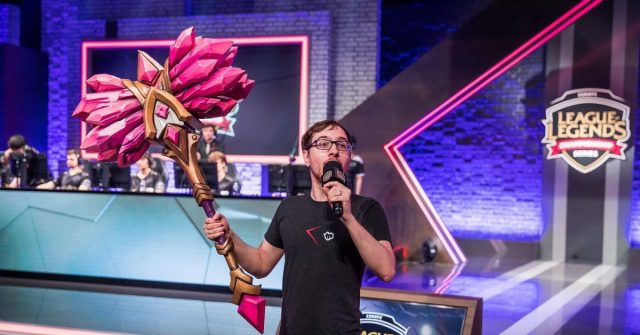 If you’ve tuned into a prominent European competitive League of Legends tournament in recent years then you’re probably familiar with shoutcaster James “Stress” O’Leary. The Cardiff-born commentator spent three years as one of the most prominent voices of the European League of Legends Championship Series, now known as the LEC.

He’s also an out gay man, placing him firmly in the minority of the esports community.

He’s faced a fair share of both supportive and hateful comments since revealing his sexuality openly. The man, much like other out LGBTQ esports figure, showed bravery just for choosing to live his truth amidst the industry’s rampant toxicity. But O’Leary recently revealed that his “one big regret” was not always being out while working in esports.

In an interview with Gayming Magazine, O’Leary revealed that he initially came to esports as a means to distract himself during a breakup. He was out to friends and family before entering the booth and “never really hid the fact” that he was gay during those early days. That all changed when he moved to Berlin.

“Moving to Germany, I initially kept my personal life private. It took until a year after moving to Berlin for me to tell any of my colleagues, and another 6 or so months to make it public in any way,” O’Leary told Gayming. “Even after a very quiet coming out, I never pushed the fact I’m gay on broadcast, and it pains me every time I think about it.”

The decision to not promote and support the LGBTQ community from his public position remains the one thing he wishes he could change. “I really wish I’d had the courage to stand up and fight for our community to be more inclusive,” O’Leary said. “I know that at any time, countless numbers of LGBTQ+ identifying viewers were watching, and by hiding myself, I wasn’t out there telling each and every one of them that they are welcome.”

Insta question prompted me to want to talk more about this:

I’m going to post about LGBTQ+ issues a lot more, not just during pride month.

I failed to use my platform to make LGBTQ+ viewers and players feel welcome when part of the #EULCS and I won’t make that mistake again. ️‍ pic.twitter.com/SL1URRymV3

In the time since he did come out publicly, O’Leary hasn’t faced much backlash from the famously trollish esports fan community. League of Legends is infamous for the amount of hate speech and abusive language used by its overall player base. That toxicity expectedly bleeds into its esports fan base as much of its audience is made up of those that play the game.

The issue isn’t exclusive to League, though. Activision Blizzard’s wildly popular Overwatch League dealt with multiple code of conduct violations by OWL-contracted players for the use of homophobic and racist language and imagery during its inaugural season in 2018.

But O’Leary is quick to recognize that just because he doesn’t see a glut of online hate doesn’t mean that other LGBTQ esports fans and employees don’t. “every so often you get a stark reminder that the world isn’t fully at the point of equality, and I’m aware that I’m saying this as a cis-gendered white male, that has many privileges others don’t.”

“My biggest piece of advice would be to be yourself to whatever degree you’re comfortable with. It’s not easy to be openly LGBTQ+ anywhere in life, and no one should hold it against you if you’re not ready to show the world who you are. That being said, try to be surrounded by people who you can be true to yourself around, you’ll be a lot happier for it!”