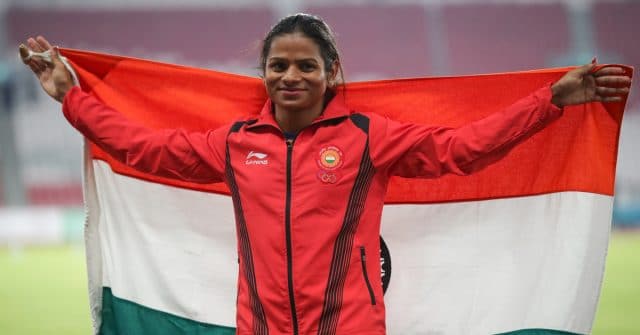 India’s first and only openly gay athlete, sprinter Dutee Chand, has been disowned by her village after coming out.

The 100-metre sprint champion made headlines on May 19 when she announced she was in a relationship with a woman, whom she called her “soulmate.”

She told The Indian Express: “I believe everyone should have the freedom to be with whoever they decide they want to be with. It is an individual person’s choice.”

Chand, 23, was praised worldwide for her courage in coming out and paving the way for other Indian athletes to do so. But locals from her home village in Odisha say it is “humiliating.”

Speaking to The Guardian, villager Prashant Behra said: “It’s humiliating for all of us. We have supported her all the way in her running but we cannot accept this relationship.

“Marriage can only be between a man and a woman. She should never have talked about it to the whole world. She should stick to running.”

Chand’s mother, Akhuji, said to the Indian Express: “I had been supporting her all along for her special interest in sports. We feel proud when she brings laurels for the State as well as the country. But I can not allow her if she wants to marry the girl. We belong to a traditional weaver community which does not permit such things.

“How can we face our relatives and the society? I am with her as long as she is with sports not beyond that.”

The backlash was so severe that Chand’s partner was forced to flee the village due to locals’ hostility.

In September 2018 the Indian supreme court voted unanimously to decriminalise gay sex — previously it was punishable by 10 years in prison. Homophobia still prevails, however, particularly in rural areas.

There are very few openly LGBT+ celebrities in India and Chand took a great risk in coming out: just a few days after she did so, villagers from another Odisha town tied a 19-year-old lesbian to a tree and beat her.

Chand said: “[People] have been telling me to marry a man and have children. That’s the only tradition they know.

“But everyone I know in the city where I studied supports me. I don’t know if my family and village will come round. I will have to wait and see.”