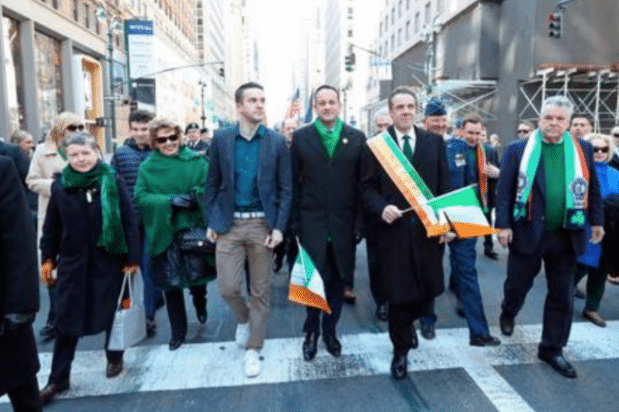 The openly gay Irish Taoiseach (Prime Minister) has made history after he marched in New York’s St Patrick’s Day parade.

Leo Varadkar joined in the parade with his partner, Matt Barrett, after a visit to the US where he met with President Donald Trump and Vice President Mike Pence.

His participation in the event is notable because it was only two years that a ban LGBTI groups marching was lifted.

Varadkar told media before he marched that he was very proud to join in the parade.

‘I’m going to be able to march in the parade now with my partner which is something that is a sign of change and a sign of great diversity, not just in Ireland but among the great community here as well,’ he said.

The Irish and its diaspora worldwide celebrate St Patrick’s Day which honors the patron saint of Ireland on March 17.

The night before the parade Varadkar visited the Stonewall Memorial in New York. It’s the home of the Stonewall Riots which triggered a wave of gay and lesbian rights movements around the world.

My first visit to the Stonewall monument. Really proud to be here #StPatricksDay pic.twitter.com/JOjlpMnbrf

The Irish Taoiseach said he had brought up LGBTI rights in his meeting with VP Pence, who is notoriously anti-LGBTI.

‘I did privately manage to speak to them about equality and my support for equal rights for women and the LGBT community here in America and also in Ireland,’ Varadkar told reporters.

‘They were very well briefed, they knew about my personal story, knew that my partner was living in Chicago.

‘They said both Matt and I would be very welcome into their home in the future.’

On LGBT rights Leo Varadkar says he spoke to Mike Pence about it and the VP invited him to bring his partner Matt to visit next St Patrick’s Day pic.twitter.com/BFuxF12jSa