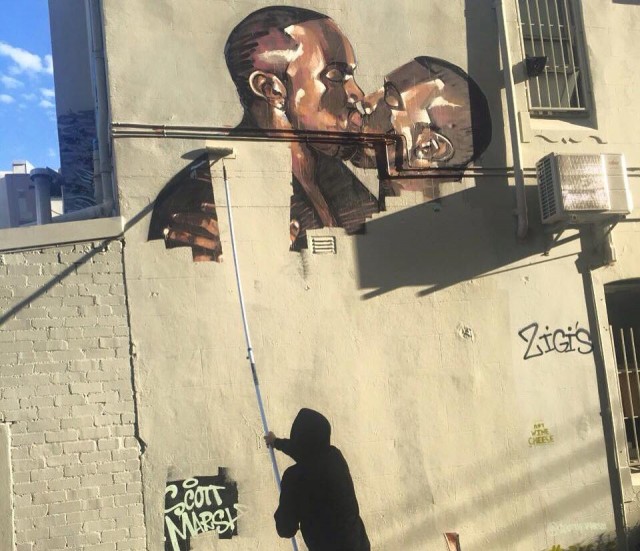 Kanye West has been involved in many news as the center of a conflict. From the “butt jokes” on Twitter where he was mocked for saying that “exes can be mad but just know, I never let them play with my ass,” in reply to Amber Rose, to feeling discriminated for not being gay!

“I feel like I got discriminated in fashion for not being gay,” Kanye West said.

“In music, you definitely get discriminated in music if you are gay. It takes amazing talents to break down barriers. Everyone thought that when Frank Ocean dropped that it was going to be bad for his career. I feel like it’s so cliché to speak about him as it relates to this subject, but there are people who broke the ground and he broke the ground. The people that break the stereotypes make history,” the artist continued.

In order for the artist not to feel discriminated, artist Scott Marsh has painted this gay mural especially for Kanye. Just that, the rock star did not take it well and, as Marsh said, he was contacted to take down the mural for “pretty decent chunk of money.”

Now, Marsh confirms that he received the “chuck of money” and the mural “has been sold” aka removed. Scott Marshal says that he received $100,000 and “if anyone needs me I’ll be at the #lordgladstone drinking from the topshelf…”